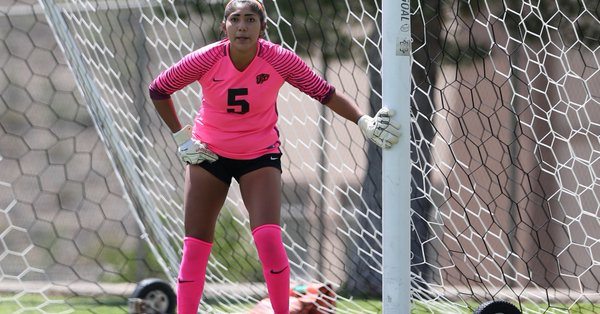 HOUSTON – The UTEP soccer team battled hard but Conference USA leader Rice scored twice in the span of the minute of a half in the second half on the way to downing the Miners, 2-0, in Houston Sunday afternoon.

“We had a tough away game at the top team in Conference USA right now who is receiving votes nationally,” UTEP head coach Kevin Cross said. “We battled them well, and just had a small span where we lost our focus. We had a few prime chances to score that didn’t go in which would have changed the game. We will be ready on Sunday versus Middle Tennessee.”

UTEP pressured early, with Cayla Payne forcing Maya Hoyer into a save in the third minute of action. The Owls then launched a counter attack where Palacios turned away the shot from Annie Walker.

The Miners had another chance in the eighth minute but it was wiped away on an offside call.

Vic Bohdan’s shot was blocked over the endline to set up a corner kick in the 18th minute but UTEP was unable to convert.

Palacios denied Marissa Topolska in the 26th minute while the Miners fought off three straight corners in a span of three minutes starting in the 32nd minute.

UTEP looked poised to break the scoreless tie in the 40th minute but Aylin Villalobos’s shot cruelly clanked off the crossboar. The Owls then raced up the pitch in an attempt to get on the board but Palacios registered the save on Jessica Johnston’s shot.

UTEP raced up the pitch off the kickoff in the second half. There was a good ball played to a cutting April Pate, but she rifled the shot high.

Walker fired from just outside the box in the 53rd minute but Palacios tracked it the entire time. A minute later the Owls regained control possession of the ball, strung together a couple of passes before Mananquil finished the cross in the box.

UTEP looked to regoup but unfortunately the Owls immediately went back on the attack, with Burgess managing to best Palacios.

The Miners then settled down, getting a look from Kennadie Chaudhary but it was gobbled up by Hoyer in the 61st minute.

Palacios was called upon in the 69th minute, stoning Mananquil on a shot in the box to keep the score at 2-0.

Jackie Soto generated a chance in the 72nd minute but she fired the shot wide of the frame. Bohdan then had her shot blocked to set up a corner kick.

Marissa Topolski tested Palacios in the 74th minute, and she was up to the task.

UTEP earned another corner kick in the 83rd minute but it couldn’t convert.

The Miners will be back home against Middle Tennessee at 6 p.m. MT on Oct. 15 in their “Kick For The Cure” game. In order to raise awareness in the battle against breast cancer, all fans who wear pink will get in free.