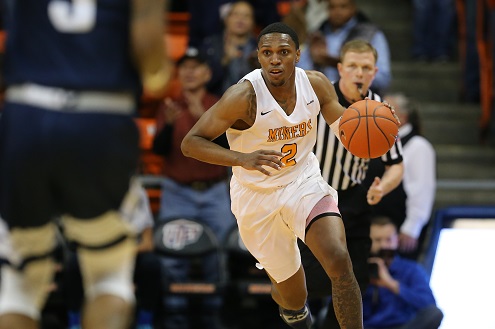 Jordan Lathon scored a career high and set a UTEP freshman record with a 32-point output and grabbed a career-best 18 rebounds on his way to his second double-double of the season, but the Rice Owls (11-17, 6-9 Conference USA) overcame a 20-point deficit and rallied to defeat the UTEP Miners (8-18, 3-12 C-USA), 85-81, in double overtime on Saturday night at the Haskins Center.

“We come out really well in the first half came up played sound defensively,” first-year UTEP Head Coach Terry Rodney said. “If we could have used that same mentality in the second half, I think we would’ve been in the position to win the ball game. We just couldn’t get the stops we wanted, but I thought our boys really played their hearts out.”

Nigel Hawkins and Evan Gilyard each scored 16 points and went a combined 14-of-16 from the free-throw line. Senior Paul Thomas, playing his second to last game in the Haskins Center, tallied 13 points, including the three-point shot that sent the game into the second overtime, and grabbed nine boards.

Lathon made a career-most six three pointers, while also registering a career-best 12 made field goals. He also tied for the team lead with three assists. Lathon’s performance was the first 30-point game by a UTEP player since Lee Moore scored 30 against FIU in the C-USA Tournament on March 9, 2016. Despite playing big, Lathon fouled out in the first overtime.

“I thought Jordan played great tonight and gave us a great effort,” Terry said. “We really missed him down the stretch and his size on defense.”

UTEP, despite not having freshman sensation Efe Odigie due to an injury, took a 20-point lead, 43-23, at the 17:00 mark, its biggest of the contest. The Owls chipped away at the score and made it an eight-point game (48-40) after a 17-5 run with just over 12 minutes remaining in the contest. The Miners answered with a three-point bucket and layup by Lathon to get the lead back to double figures (53-40).

Rice wouldn’t go away when it cut the deficit to six points (53-47) at the 9:05 mark on a made jumper by Quentin Millora-Brown. The Owls took their first lead of the game, 56-55, with 4:14 remaining on a Drew Peterson layup.

The two teams traded blows down the stretch as UTEP took a 62-59 edge with 1:52 left. Rice answered when Robert Martin and Millora-Brown went a combined 4-for-4 from the free-throw line to take a 63-62 lead with 55 seconds remaining. Lathon, after drawing a foul, hit one of two from the line to tie the game with eight seconds left. Trey Murphy III missed a last-second jumper that forced the first overtime.

After UTEP built a five-point lead (70-65) off a Lathon three pointer, Rice answered with an 8-0 run capped by a Martin three-point shot to take 73-70 lead with 18 seconds left. But Thomas came up with a clutch three-point bucket of his own to tie the game at 73-73 with 16 seconds remaining to send the contest into its second overtime.

The Miners were outscored 12-8 in the final session. Gilyard made a pair of free throws, giving his squad a 77-75 lead, but Rice finished out the second OT on a 10-4 run.

Martin recorded a double-double of his own, scoring 23 points and registering 13 rebounds off the bench. Chris Mullins chipped in with 19 points on 10-of-13 shooting from the foul line and Murphy III scored 14 points.

Lathon started the contest 7-of-7 from the field and 4-of-4 from downtown that gave the Miners a 37-20 halftime lead. The 17-point advantage tied the biggest of the season after being up 17 against Northwestern State on Dec. 1 by the same exact score.

UTEP never trailed the first half and went up as many as 19 points (37-18). With the score 23-14, Rice’s Josh Parish hit a three pointer at the 8:26 mark. The Miners answered with the 14-1 run, while they ended the first half on a 14-3 run, while Rice had connected on only one field goal on seven attempts to end the half.

Lathon led the way with 18 points and seven rebounds, while Gilyard tallied eight points. UTEP shot 7-of-14 from downtown and 13-of-26 overall from the field.

Up next, UTEP will travel east to Charlotte for a Sunday, March 3 matinee. The Miners and 49ers will tipoff at 11 a.m. MT/1 CT in Halton Arena.