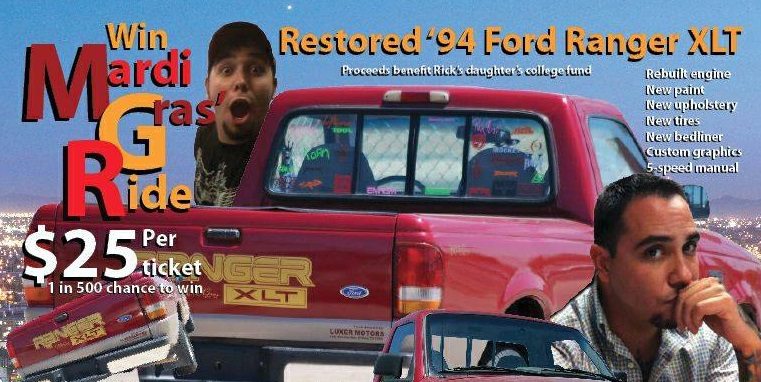 Friends and family of Richard “Mardi Gras” Madrigal will gather this Saturday, October 14, 2017 at 4:00 p.m. at Luxer Motors, 9725 Montana Avenue, to draw a winner in the “Win Mardi Gras’ Ride” raffle. The event is open to the public.

Richard L. Madrigal, Jr., known to his fans as “Rick Mardi Gras,” was shot and killed at his apartment on June 11, 2016. Richard left behind a young daughter, and the Madrigal and Austin families have been working to establish a college fund for her.

A friend of the family, Ali Rouhani of Luxer Motors, who had purchased Rick’s truck a few years back, approached the family shortly after Rick’s death and offered the truck, still in Rick’s name, to the family to be restored and raffled.

The 1994 Ford Ranger has been lovingly restored over the course of the last year, and tickets went on sale for $25.00 this summer. The drawing will be held on the eve of Mardi Gras’ 35th birthday.

Luxer Motors and the Madrigal and Austin families will serve hamburgers, hot dogs, and sodas throughout the day for any member of the public wanting to participate in the event.

Tickets will be available on the day of the raffle for $25.00. Winner need not be present to win.