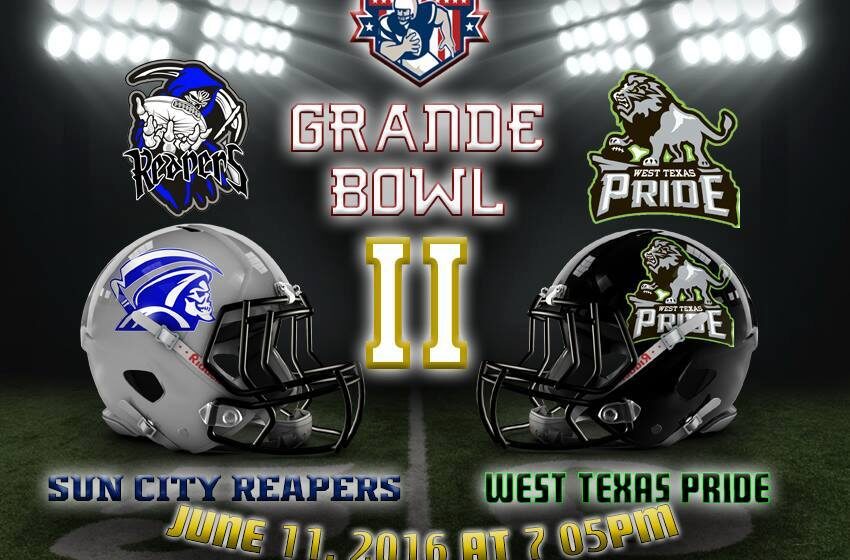 After providing state-of-the-art facilities for the El Paso Armor at Emperor Stadium at Horizon High, the league voted to award the game to Clint ISD and their facility located just north of Horizon City (14651 Horizon Blvd, El Paso, TX 79928)

As for the teams, it’s a battle of old school versus new, as one of the founding franchises of the RGFL – the Sun City Reapers (9-2) knocked off the defending champs Las Cruces Kings, marking their return to the top of the Western Division.

Prior to last Saturday’s loss, the Kings had not lost a game since March of 2015.

The Reapers will be battling the newest RGFL franchise – the ‘Beasts of the East’ – the West Texas Pride (10-1) , based out of football-crazy Midland/Odessa. The Pride defeated long-time RGFL member Curry County Cats in the Permian Basin last Saturday night.

This spectacular match up gets underway Saturday, June 11th at 7:05pm at Emperor Stadium.

Tickets are only $5 for adults, kids 12 and under in free. The RGFL will also honor those serving in or retired from the Military, First Responders and Educators by offering them a $1 discount for admission.

A portion of the game’s profits will be donated to the Clint ISD Superintendent’s Scholarship Fund.