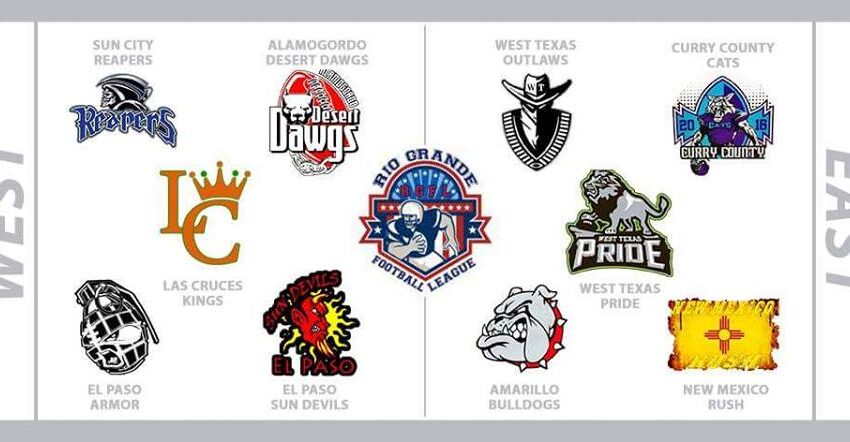 While the calendar may say February, the season Winter and the weather Summer, the regional Triple-A level Rio Grand Football League (RGFL) kicks off their season today.

The league now a year out from their re-branding, has been around for nearly a decade when it was known as the New Mexico Premier Football League, now features four brand-new franchises and more familiar rivalries for football fans in the Borderland.

El Paso leads the way with three franchises: the El Paso Armor, Sun City Reapers and the El Paso SunDevils; while the Las Cruces Kings – 2016 Defending League Champions – and the Alamogordo DesertDawgz round out the Western Division.

In the East, the Curry County Cats are joined by the four new franchises. The West Texas Pride now carries the gridiron flag for football-crazy Midland-Odessa area, the New Mexico Rush call Carlsbad home, with the Amarillo Bulldogs and the West Texas Outlaws call the Lubbock area home.

As the Kings look to defend their title, the competition is fierce, as the Armor have seen the playoffs the last 3 seasons, while the Reapers came within a two-point conversion of knocking off the Las Cruces Team. The SunDevils start their second year in the league, only one win removed from making the 2015 Division Championship game.

The Curry County Cats again look to make their case for a championship, but with the other four up-and-coming-franchises in the East, it will be an interesting season on the high planes of New Mexico and West Texas.

With the inclusion of so many areas rich in football tradition, the season looks to be one of the most competitive to date.

League officials point to the make up of the teams and the fans they bring as keys to the league’s success.

For individual team information, such as home fields and schedules, click on the hyperlinks embedded in the team’s name above.