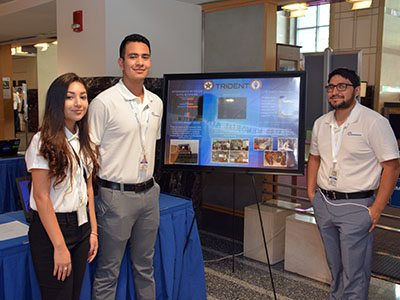 Riverside High School engineering students competed and won their division in a nationwide design competition sponsored by the University of Alabama at Huntsville and NASA.

The students designed a payload for the exploration of Neptune. As part of the competition they also did community outreach events where they visited to schools in the district and presented on science concepts.

Also as part of the competition, the students created a video that was shown on the Chihuahua’s Jumbotron during a game.

Earlier this summer, selected students traveled to Washington D.C in an all-expense paid trip to present their poster at NASA headquarters.

The students participated in a semester long competition where they designed a payload for space exploration. In addition, they submitted a proposal and poster for judging by NASA engineers and aerospace engineering from the University of Alabama at Huntsville.