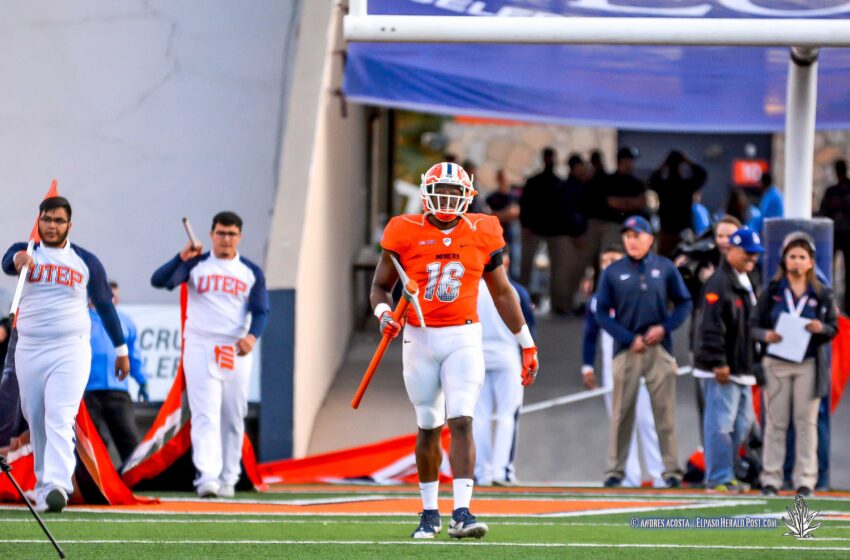 Jalen Rhodes rushed for two touchdowns, and Devron Davis had a crucial interception for a touchdown early in the fourth quarter as UTSA beat UTEP, 31-14, on Saturday night in the Sun Bowl.

For the fifth time in as many games in the series, the visiting team was victorious as UTSA moved to 5-2 overall (2-2 Conference USA) and UTEP fell to 0-8 overall and 0-4 in league play.

“That wasn’t very good,” UTEP Interim Head Coach Mike Price said.  “We played hard.  We certainly didn’t play real smart.  The team that makes the least mistakes in this game usually wins, and no question about it, we made not very smart plays and it came back to hurt us.”

The Miners fell behind 17-0 midway through the second period, but rallied with back-to-back touchdowns to make it a three-point game at halftime.  Zack Greenlee finished off a seven-play, 70-yard drive with a six-yard touchdown run.  Then the Miners capitalized on an interception by Roadrunner quarterback Dalton Sturm, as El Paso native Joshua Fields scored his first college touchdown on a five-yard scamper to cap a 40-yard drive.  Justin Rogers picked off the pass, tying him for team-high honors with two interceptions this season.

“I thought we had a real chance in the first half,” Price said.  “The defense, at times, is playing well enough to win in this league.  They didn’t have that many yards.  They were well below their average against us.”

The 17-14 score held up until late in the third quarter, when Rhodes punched it into the end zone from one yard out to put the Roadrunners up by 10.

The Miners fought gamely but wouldn’t score again, and Davis dealt the crippling blow by picking off Greenlee on a third-and-five deep in UTEP territory early in the fourth quarter before running 22 yards to the end zone.

Rhodes ran 14 times for 66 yards, but he was UTSA’s third-leading rusher as Tyrell Clay gained 71 yards and Sturm added 67.  The Roadrunners ended the night with 393 yards of offense, including 205 rushing.  Sturm completed 18-of-30 passes for 188 yards.

Greenlee was 8-of-29 passing for 133 yards for the Miners, who were held to 243 yards by Conference USA’s top defensive unit.  Erik Brown snared three catches for 52 yards, and Tyler Batson had two catches for 45 yards.

UTEP’s all-time leading rusher, native El Pasoan and Green Bay Packers rookie standout Aaron Jones returned to the Sun Bowl on Saturday night.  And his message to the fans, and the team, early in the second quarter appeared to give the Miners the offensive jolt that they needed to get back in the game before stalling in the second half.

“In the second half, we again fell apart,” Price said.  “We’re not a very good second half team.  I don’t know if our adjustments are good as coaches.  They probably aren’t good, if they were good then we’d do a lot better.  But we made some serious mistakes offensively in the second half.  We’ve got to quit making mistakes like that.  It wasn’t pretty.”

The Miners will hit the road for consecutive games at Middle Tennessee (Nov. 4) and North Texas (Nov. 11).  Next weekend’s matchup with the Blue Raiders will kick off at 5:30 p.m. MT from Murfreesboro and will be televised on beIN SPORTS.

Monster’s Musings: Hoping Against Hope as Miners Drop to 0-8