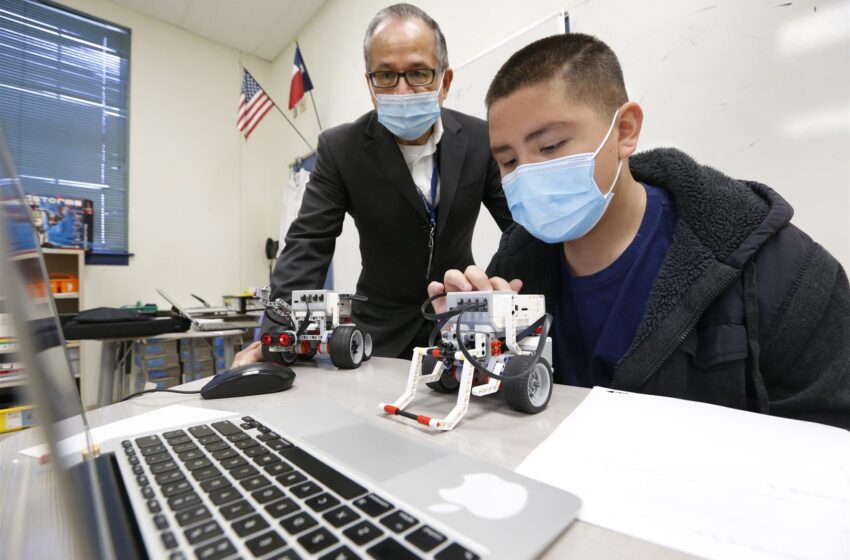 A new robotics program at Guillen Middle has students buzzing with excitement – especially in the AIM unit.

Morales saw the need and knew what a robotics program could do for the school, so he quickly applied for funding through Donors Choose and received more than $16,000 in Logo robotic kits. The former principal and interim administrator had implemented similar programs at other campuses and decided to return to the classroom to work directly with students again.

“My intent was to propel the AIM students to a different trajectory and introduce them to STEM (science, technology, engineering and math), develop their confidence and abilities to do STEM,” Morales said. “Historically, special education students have been left out of programs such as robotics. That was a big factor for me to go into the AIM unit at Guillen – to show what is possible.”

Morales’ enthusiasm for robotics is contagious. His students eagerly manipulate their bots, working both from the computer and on the Lego mat. The students even built an EV3 Mind Cuber that can solve a Rubik’s cube in 25 moves.

“It’s exciting to see their enthusiasm and energy level and just learning,” Morales said. “It’s been amazing to see them build various models. They’ve helped each other and followed the core values of the Legos League. I’m very proud of them.”

Morales looks over Leo Bereja’s shoulder, offering some guidance while the sixth grader maneuvered some programming hiccups.  With laser focus, Leo entered commands into his MacBook Air to make his Lego EV3 robot light up, move and make sounds.

“I love robots,” he said. “I like connecting them through Bluetooth and making them make sounds.”

Classmate Joanna Oropeza equally enjoyed the introduction of robots to the class.

“I love building robots. It’s entertaining,” she smiled. “It’s cool to build and pretty amazing how we put the parts together and make them move.”

Morales teaches robotics to 25 students in sixth through eighth grade, some of whom are part of the AIM unit. He extended the program to after school, giving another 35 students the opportunity to engage in the Lego robotics world. He’s hoping to take a team or two to the West Texas Lego competition next year.

“It’s an introduction to what’s possible in the field of STEM if they decide to go that route,” he said. “It’s also developing their teamwork and confidence in themselves and each other.”