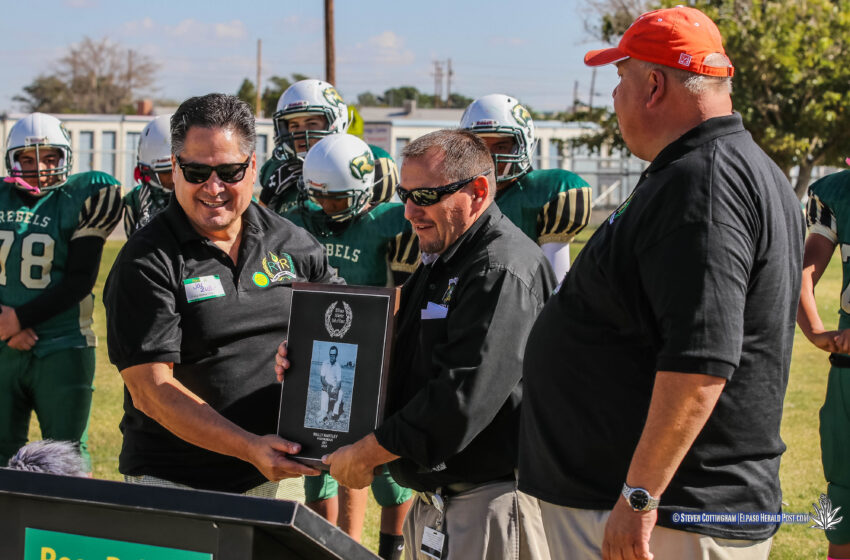 Friends, family, students and players gathered at Ross Middle School Saturday to bestow an honor on a beloved educator and coach.

“He wasn’t a very big man in stature. But he was not afraid to get in your face and be in your face. He didn’t care how big you were. He got toe-to- toe. I don’t know how he did that, I don’t know what he did, but that was one of my favorite memories about him,” said Joe Zubia, remembering Coach Wally Hartley

We all have a teacher, someone that reached us as no other could. In every school there is that one person that makes it their goal to see that each one the encounter will succeed, will have what they need, will make it no matter what.

For me, that was Paul Strelzin. He was the principle of H. E. Charles.

Mr. Strelzin was bigger than life. Whenever he wanted to be heard, he could be heard over several hundred rowdy kids without a microphone. He also had a heart to match, a heart that was larger than anything I’ve known.

All these years I thought Paul Strelzin was a one of a kind; but on Saturday I learned about Coach Hartley. He and Mr. Strelzin come from the same stock.

Under his famous motto: “Pride Makes Champions,” Coach Hartley was the Head Coach at Ross Junior High from 1964-1984. During his tenure, Coach Hartley won over twenty District Championships in Football, Track, and Cross Country.

Some of those teams went undefeated during their respective seasons. He created a dynasty at the Junior High level that is unmated by few but desired by many.

On Saturday, many alums who either played under Coach Hartley, or were at Ross when he was there, gathered to dedicate the football field he built, to his memory. He is a man who touched the lives of many. I think he would be proud of his students and players today.

While sitting in the cafeteria, waiting to interview Edmundo Calderon, I discovered just how deep Coach Hartley’s commitment to the wellbeing of this players and students was.

As I was sitting there, listening to Mr. Calderon talk to many alums who passed by our table I heard him recount a bit of history.

“After I left, after I left Burges, I was at UTEP,” remembers Edmundo. “Coach would say ‘I want you back here by November 15th . Every six months I had to come back and check in with him.”

The coach would want to know when he was going to graduate, how he was doing, and if he needed anything. You don’t see this very often, an educator taking care of his students, current, and past.

In fact, hearing others talk about the Coach, before the dedication of the field, he had an impact spanning thirty-three years, and longer.

“I didn’t have a father figure in my life,” said Arturo. “He was that for me. He was there for me. If it were not for him, I don’t know what I would have become.”

Both Edmundo and Joe Zubia were classmates as well as team mates. After all these years they are still friends. In fact, Joe married his Middle School Sweetheart!

Somehow, in some ineffable way, Ross Middle seems to tie people together. Joe began by telling me about the man they came to honor, “Coach was a unique individual. He installed so much. But the biggest thing he did for us was instill pride.”“Pride is so important in respect,” says Joe.

Looking at the people that gathered for the dedication, and not just the alumni of Ross, but current students and their parents, I could see a level of pride not found anywhere else. Respect, and pride.

“What I remember most,” says Edmundo of Coach Hartley, “was the discipline he gave us. And, he had a rule that you didn’t have the be the smartest kid in class, but you had to be the best behaved. And you had to respect your teachers, your elders, your parents. If you didn’t, you suffered his discipline.”

That respect carried over to them. In Middle School, on Friday’s each member of Coach’s team had to wear a dress shirt, a tie, and have their shoes shined. When I was that age, the only time I ever dressed up for school was on Wednesdays when we had to wear our dress greens for JROTC.

“He wasn’t a very big man in stature. But he was not afraid to get in your face and be in your face. He didn’t care how big you were. He got toe-to- toe. I don’t know how he did that, I don’t know what he did, but that was one of my favorite memories of him,” said Joe Zubia, remembering Coach Wally Hartley

“My favorite memory,” says Edmundo, “I had already left school. I finished high school. I graduated from UTEP. I started refereeing football. One day I ran into him, and he gave me a little bit of hard discipline, I was an adult.”

Edmundo said, with tears beginning in his eyes, that he asked Coach Hartley why he always cared about his students. “He said, ‘When I looked into one of your guy’s eyes, and you looked back at me, you had something inside, you were worth it to me.’”

“It showed us how he really cared about us,” recalls Edmundo.

Coach Wally Hartley Field is the first Middle School field to be named after an individual, much less a former Coach. From what I learned, it is an honor he would have eschewed. He was not one to focus on himself, but on his students, his players, his
school.

Just like Mr. Strelzin made an impact on my life, Coach Harley has made an impact on the lives of those who knew him. The values, the respect he instilled has been instilled in children, grandchildren, and a new generation of students at Ross. It’s a tradition that
continues.

As people were walking the halls, visiting the locker room to see if it was the same, visiting old classrooms, and filling into the cafeteria, I knew it was time to end my interview. People were stopping by the table to catch up with both Joe and Edmundo, and the voices were beginning to echo off the walls.

Before we parted, I asked them if they wanted to share one last thing, anything.

“I think our country; our community could use a man like Coach Harley,” said Joe. We know that deep down inside that he probably wouldn’t be accepted as well, our society has changed. Not that what he did any type of corporal punishment, or anything, but the
discipline and respect that I think is sometimes lacking in our youth today is sorely needed. It’s the one thing Coach Hartley believed in and knew that if you instilled that in any individual he knew he had done his job.”

If you would like to watch the interview with Joe and Edmundo, click on the play button above.  (Author’s note: I do apologize for the volume of background voices, even with mics, I couldn’t do much to reduce it.)

Don’t let that stop you, watch the interview and you will see the love and respect these men still carry for their Coach.
To watch the dedication ceremony, click below. 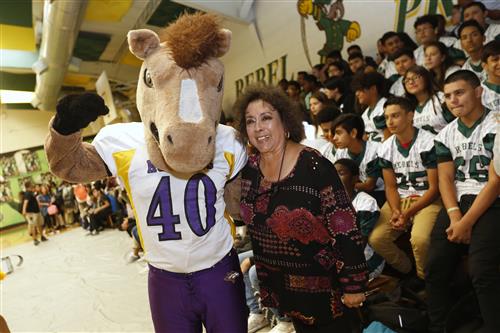 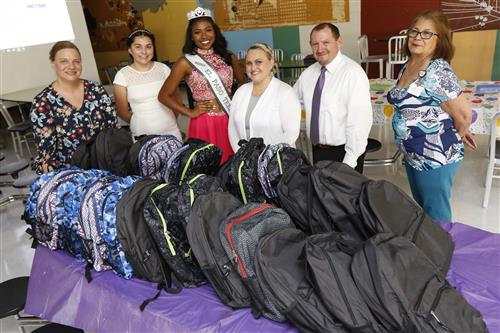