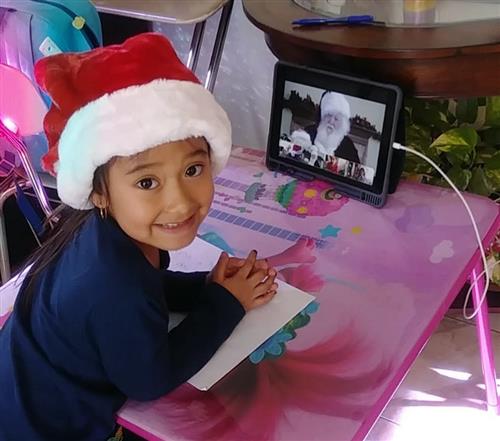 MacArthur kindergartners erupted in cheers and smiles this week when Santa Zoomed into their virtual classroom, reassuring the children that even the pandemic can’t stop him from visiting.

“My students were very excited to talk with him and eagerly shared their Christmas lists,” said teacher Maria Westcott. “They are definitely in the holiday spirit now and looking forward to Santa’s visit.”

Santa entertained questions and told them stories about the reindeers and his upbringing and how teachers made a difference in his life. This particular Santa hails from New York, having donned the suit since 1970 to spread holiday cheer and raising money for charity. His mission: share a message of hope.

“The reason I think it is important to see Santa during difficult times is to give them hope,” Santa said. “That is what teachers did for me.”

Little Joaquin Herrera grinned from ear to ear during his class’ virtual visit with Santa.

“I was very cool,” he said. “I asked him if he had elves and told him that I know he likes milk and cookies.”

Joaquin also asked for Pokemon toys and kid electric motorcycle. When asked if he’d been good this year?

“Umm, I think I was being good this year.”

The Zoom Santa’s uncanny resemblance to the most famous resident of the North Pole gave the children reason to pause and believe.

“In awe of the interaction, one student even told Santa that he had never seen a ‘real Santa’ before and that he knows Santa likes cookies with milk,” Westcott said.

Santa looks forward to Friday when he returns virtually to MacArthur to visit pre-kinder classes. He hopes the surprise visit lifts their spirits during this unusual time.

“Everyone is going through hard times including Santa,” he said. “But we will all come out of this with kinder feelings toward everyone and renewed hope for the future.”