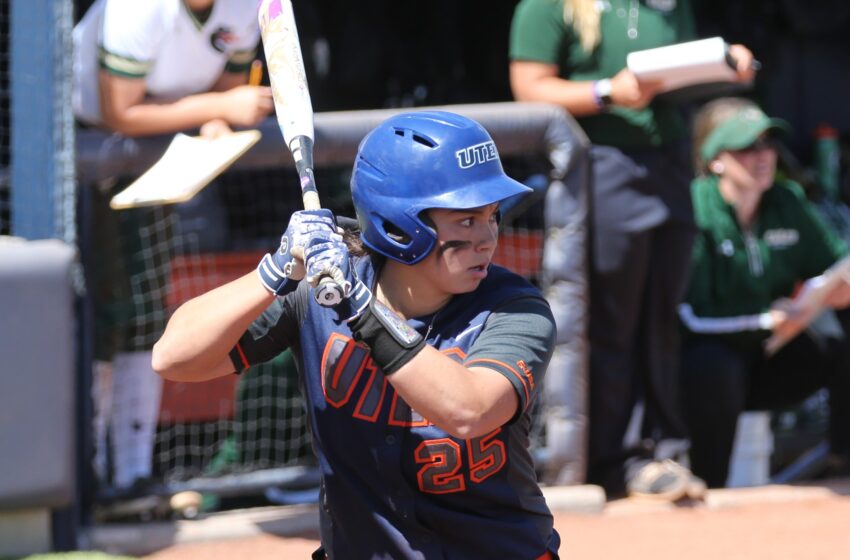 North Texas entered Saturday’s contests as one of the conference leaders in multiple offensive categories, while its home run total ranks in the top 10 nationally. But it was UTEP that showcased its offense by amassing 24 hits and scoring 22 runs.

“We hit the ball well and it was the one through nine hitters. Not the top half or bottom half, it was everyone hitting well,” fifth-year UTEP head coach Tobin Echo-Hawk said. “We hit well especially with runners in scoring position, we did a great job of making good, solid contact.”

The Miners went 13-for-26 with runners in scoring position on Saturday.

Overall, UTEP hit .421 (24-57) in the two contests, led by Kacey Duffield’s .571 average (4-for-7), six RBI, double, three runs and home run. Duffield registered a career-high four RBI on a 2-for-3 outing in game two. Taylor Sargent registered a three-run triple in game two. Leadoff hitter Ariel Blair went a combined 4-for-7 with four runs scored on the day, while Kaitlin Ryder went 4-for-5 (.800 avg.) with four runs and a RBI.

Kira McKechnie (8-7) won game one, tossing 6.0 frames and recording a career-high six K’s, while Julia Wright earned her C-USA-leading fourth save. Wright (4-14) went on to win game two, tossing a complete game and tying her season high with seven K’s. The telling stat for Wright was only two walks given up on 110 pitches thrown in the second contest.

UTEP will look to sweep its first conference series of the season as Sunday’s series finale is set for a noon start.

“We need to come back strong [on Sunday] and don’t pat ourselves on the back,” Echo-Hawk said. “We need to show up tomorrow with a lot of energy and work on making sure we have good at bats and that our pitchers keep us in the ball game.”

UTEP 11 – NORTH TEXAS 8
The Miners took a 6-2 lead after freshman Ariana Valles doubled in Blair during the fourth frame.

But the Mean Green used a four-run sixth inning to tie the game 6-6 after a Sam Rea three-run home run and a Lindsay Gregory RBI single.

The Miners matched the four runs and added another in the bottom sixth to take an 11-6 lead. But it was Blair’s at bat that surged the Miners back on top. After Ilena Santos reached on an error, Blair used her speed to reach on a bunt single, but a but throw by the UNT third baseman went all the way to foul territory in right, scoring Santos, while Blair was credited with a ‘little-league’ home run.

Blair’s blazing speed gave UTEP an 8-6 go-ahead lead. McKechnie then pushed a ball to left that scored Valles, while Mariah Ellis, in a pinch-hit situation, came up with a two-run single that gave UTEP a five-run lead.

North Texas made it interesting by scoring two more runs in the seventh, but Wright got out of a bases-loaded jam and forced Nicole Ochotnicki to groundout to first baseman Duffield to clinch the victory.

Blair went 3-for-4 with three runs scored, tying her career high in hits and runs. Ryder went 2-for-3 with two runs scored and Courtney Clayton recorded a RBI double in the third and scored two runs. Clayton registered her 13th double of the season. Duffield went 2-for-4, including a two-run single in the third.

UTEP 11 – NORTH TEXAS 5
The Mean Green would find themselves down again, this time down 3-0 after a Duffield two-run home run and Pamala Baber RBI single in the second inning. As it did in game one, North Texas tied the contest 3-3 off a Rhylie Makawe three-run home run.

But the stage was set for Sargent.

Valles led off the third inning with a single, while Clayton drew a walk and Duffield drew a two-out walk to load the bases. Sargent stepped into the batter’s box and unloaded on the first pitch. The senior drilled the ball to deep right center, clearing the bases and giving the Miners the go-ahead 6-3 lead.

After UNT got within two runs in the fourth, the Miners added three more runs in home half. McKechnie was hit by a pitch was bases loaded that scored Valles, and Duffield connected on a hard-double hit to deep right center that plated Clayton and Ryder.

Valles scored a career-high three runs on a 2-for-4 performance, while Ryder added a 2-for-2 outing with two runs. Clayton scored two more runs and Cortney Smith went 2-for-3 with a run scored.