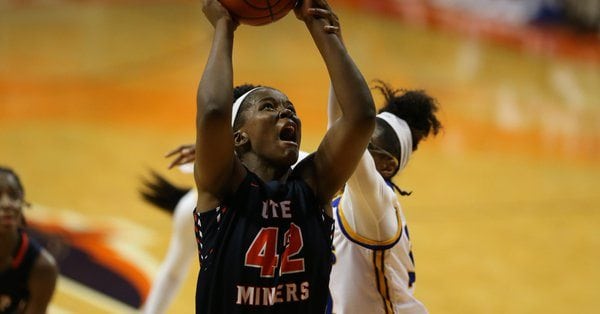 HATTIESBURG, Ms.- Tamara Seda notched her 13th double-double (14 points, 13 rebounds) of the season but homestanding Southern Miss made a late run to clip the Miners 60-53, in Hattiesburg Sunday afternoon.

UTEP connected on 43.2 percent (19-44) to USM’s 41.1 percent (23-56) and easily controlled the boards (39-23) but the home side nailed nine 3-pointers and forced 24 Miner turnovers that led to 35 points. Seven of the giveaways came in the final 6:14 of the contest to fuel the USM comeback, including five straight possessions during the first three minutes of the sequence.

The Orange and Blue led for nearly 25 minutes, and were up by seven (47-40) late in the third quarter only to have the Lady Eagles rally. The game featured five ties and three lead changes.

“The turnovers were in timely moments and the last two minutes we didn’t play very well,” UTEP head coach Kevin Baker said. “We just turned it over in crucial times when we needed a basket. I just hate it for our team because we played well but didn’t finish. We always have a chance to win.”

Jordan Alexander joined Seda in double figures with 10 points while four other Miners scored between six-eight points each. USM was paced by a 22-point outburst by Megan Brown, including going 6-10 from distance. Shonte Hailes and Jayla King each netted 10 points.

UTEP vaulted out to a 10-4 advantage with 3:04 to play in the opening quarter. USM struck back with an 8-2 surge to forge the first tie of the tilt at 12-12. A free throw by Zec late in the frame afforded the Miners a 13-12 edge through 10 minutes of action.

The Lady Eagles opened up the second quarter by peeling off seven straight to put the Orange and Blue down six (19-13) with 7:08 to play in the half. The Miners regrouped and fought back by going on a 12-6 run to close the period and pull even at 25 heading to the locker room.

The Miners had a 10-3 burst to christen the third quarter, nailing 5-6 shots from the floor in the process. The advantage remained seven (39-32) with 3:32 left in the period before USM drilled consecutive 3-point shots to cut the margin to one (39-38) and force Baker to call timeout. The stoppage paid dividends, with UTEP tallying six straight points to go back up by seven (45-38) late in the quarter. USM got a jumper in the waning seconds to make it a five-point contest (45-40) after three quarters of play.

The home side ripped off five consecutive points to begin the final frame. UTEP stopped the sequence with a 3-pointer from Alexander to go up by three. It remained a three-point differential (50-47) with 6:14 to play in the game but the Orange and Blue couldn’t find a way to finish. Southern Miss scored the next 11 points in the contest before Seda drilled her first career 3-pointer, but the damage had been done.

The Miners will return to action with a two-game homestand to wrap up the regular season. UTEP will lock up with FIU at 7 p.m. MST on Thursday before squaring off with WKU on “Senior Day” at 1 p.m. MST Saturday. Both games will be broadcast on 600 ESPN El Paso with Steve Kaplowitz and Traci Miller on the call. Additionally they will be streamed on CUSA.tv (subscription required).