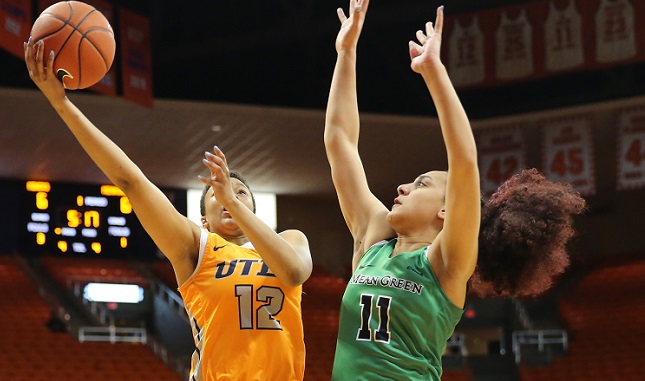 “We really executed the defensive gameplan for today,” UTEP head coach Kevin Baker said. “We guarded them exactly the way we wanted to. I’m proud of our bunch. We played solid offensively and really executed. It’s some of the best basketball we played all year. It’s a great time of year to be playing good basketball. We beat a good team today.”

While UTEP finished 7-14 (50.0 percent) at the charity stripe, it made them when it mattered. The Miners were 6-8 (75.0) in the fourth quarter. That included Alexander sinking 3-4 in the final minute, including a pair with 15 seconds left to salt away the victory.

Freshman Ariana Taylor added seven points to buoy the efforts of Zec, Alexander and Puc, but it was her defense down low that also stood out. Neidy Ocuane pitched in six points, a team-high tying five assists and four rebounds. UTEP was competitive on the glass (UNT, 32-30), with Alexander securing a squad-best seven caroms.

Anisha George tallied 19 points to go along with nine rebounds to lead the way for the Mean Green. Terriell Bradley and Charlene Shepherd each scored 10 points in the losing effort.

UTEP led for 32 minutes of the contest, and on multiple occasions was up by as many as 13.

UTEP started quickly, nailing triples on consecutive possessions to take an early 6-0 lead. UNT countered with a 6-0 push of its own to force the first tie of the tilt with 5:32 to play in the opening quarter. After the two sides traded scores, the Mean Green got a triple late from Bradley to put the Miners down by three (11-8) through 10 minutes of action.

George hit a jumper on UNT’s first possession of the second quarter, and suddenly the Orange and Blue trailed by five (13-8).

That deficit was short lived, though, as the Miners ripped off seven consecutive points over the next two minutes to regain the lead (15-13). Alexander was instrumental, tallying five of the seven points in the surge.

The Miners continued to play well as the second half started, with a corner triple by Ocuane reinstating a 13-point cushion. UNT chipped away the remainder of the frame, but the Miner lead was still seven (43-36) through three quarters of play.

Zec and Puc each connected on jumpers to start the fourth quarter off well, which also afforded UTEP a double-digit advantage (47-36) with 8:56 remaining in regulation. North Texas mounted a rally, cutting the Miners’ lead down to two (49-47) with 3:56 left. Zec hit a crucial pull-up jumper to stop the surge. After UNT got within two again (51-49), Puc drilled a jumper in the lane off a feed from Ocuane. The Miners then did enough at the free-throw line to put away the game.

The Miners will be the 11th seed and will square off against sixth-seed Marshall. It will be available on ESPN+. The game will also be broadcast locally on 600 ESPN El Paso with Steve Kaplowitz and Traci Miller on the call.