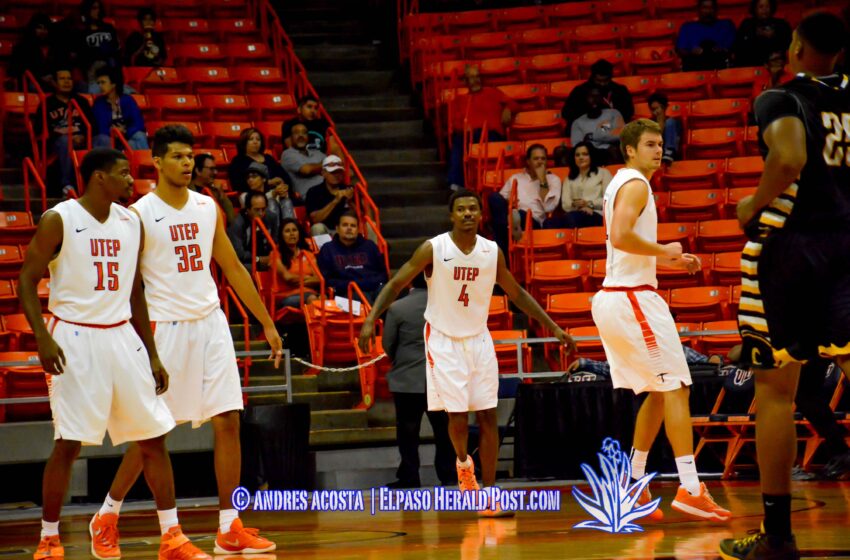 College athletics is a constant revolving door. One player leaves, another enters. It paves the way for new faces to shine, and others to leave their glory days behind them.

That was supposed to be the story for the 2015-16 UTEP Miner men’s basketball team. It got a little exaggerated Saturday when they played the Cameron Aggies in their first exhibition game.

So exit potential starters and role players, and enter Lee Moore. Fresh off a 31-point performance in the Orange and White scrimmage last week, the 6-4 guard finished with a game-high 28 points and 11 rebounds, including a 9-0 run of his own in the final minutes to give the Miners a 78-69 victory over Cameron.

Moore, who was unavailable for comment following the game, led a group that included two returners, six newcomers and two redshirt players who saw action two years ago.

“We knew Lee was a good player,” said assistant coach Phil Johnson, who stepped in for Floyd when he learned of his sister’s passing the morning of the game. “I felt like we were trying to figure out a way to score a basket and we needed him. I thought he had to touch the ball somehow.”

Despite the game not counting towards the overall record, naturally, the Miners were still going for the win. Moore made that point in a back-and-forth affair that UTEP actually trailed for the majority of it, including 67-65 with 5:03 to go.

The Miners quickly turned that around as they then went on an 11-0 run, including the last nine-straight points coming from Moore.  Moore

showed spurts of his offensive versatility in the first half, including the team’s only three in an overall woeful three-point shooting night (2-of-13). He led all scorers with 15 in the first half points and scored 10 of the final 11 points of the frame.

Senior guard Victor Mbachu finished the game with 14 points, the only other Miner in double-figure scoring. He stepped in for a squad that saw a lot of four-guard play throughout the game.

“I think early I was forcing a little too much and as the game went on, I think I just let it come to me more, be more patient,” Mbachu said. Johnson said that because the team played small ball so often, inevitably, they struggled on the glass despite out-rebounding Cameron 43-34.

Matt Willms, one of two returning Miners who suited out, played just seven minutes as he rests his ailing foot. It was reported initially that he was going to miss the entire season, but has decided to play through it. Johnson said his minutes will be monitored closely all season. “We talked about it at half if we wanted to play him and we really tried to watch him. In an exhibition game I don’t think there’s a real need,” Johnson said.

“Obviously, we want to win but there’s no need to play him a lot of minutes and risk anything.” The Miners relied heavily on the other returnee, center Hooper Vint, who finished with eight points and six rebounds, and freshman Paul Thomas, who had seven points, seven rebounds.

“Paul is a really good player for us … he’s realy athletic, he can drive, he can pop and shoot it, he can play defense for us,” Vint said. “I think he’s going to play a lot for us this year because he’s looked good in practice.”

When he figured out he wasn’t going to make it to the NBA after getting cut from his eighth grade basketball team, William Vega just couldn’t leave sports. So, he decided if he couldn’t walk the walk, he wanted to at least talk the talk, er, write the write, in this case. He interned for the sports department at KVIA following high school, wrote and was an editor at The Prospector from his alma mater, UTEP, and had brief stringing and freelance stints at the El Paso Times from 2013-14. He is now the journalism adviser at Bowie High School, his second year heading the one-man department there after beginning his teaching career at Coronado in 2012. Enjoy.