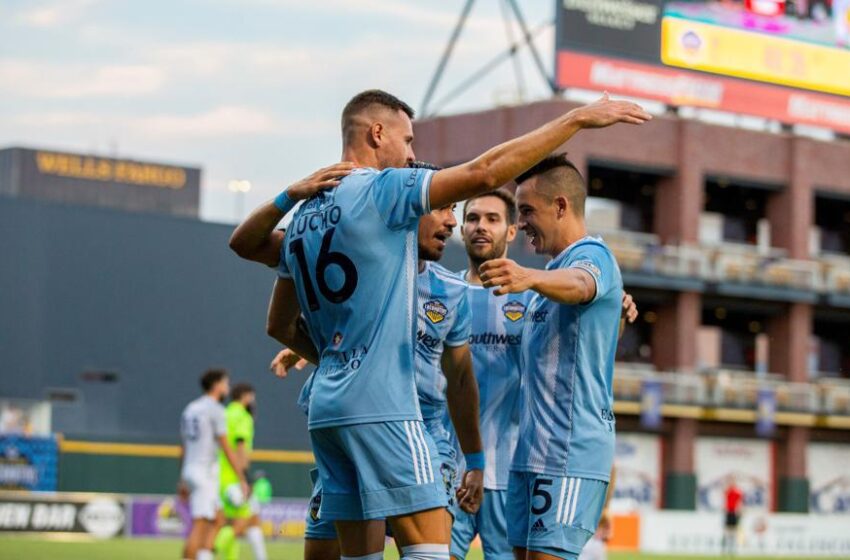 Midfielder Diego Luna recorded his fifth goal of the season to open the scoring while Midfielder Jose Aguinaga etched his name into Locomotive history books with the club’s 100th goal across all competitions. Meanwhile, Goalkeeper Logan Ketterer earned his third clean sheet of the season with two saves throughout the night.

“We were in control for most of the game, but it wasn’t a great performance,” said Head Coach Mark Lowry. “We didn’t really set the world alight, but we did enough. We were comfortable. We could have done more, and we should have done more. I want to see these games end three or four to zero. That’s kind of where we are at right now. I’m happy with the three points but I think there is still more for us to do.”

Wednesday night’s action got off to a slow start, with neither side making any headway through the opening 30 minutes. The 29th minute saw the game begin to open up as Luna played the one-two pass with Midfielder Dylan Mares to get past the San Antonio keeper.

Locomotive kept the momentum to close out the first half with their second of the night and the 100th club goal as Forward Lucho Solignac passed the ball back to find a leaping Aguinaga who headed away the milestone goal.

The second half got off to a rapid start with San Antonio chasing the two goals. Locomotive defended well through Defenders Yuma and Mechack Jerome keeping Ketterer without much to do on the night for the clean sheet.

The Locos faced adversity with a red card shown to Midfielder Bryam Rebellon in the 77th minute. Down a man for 15 minutes including stoppage time, Locomotive bunkered down to keep San Antonio with only two shots on goal throughout the night and secure a needed clean sheet.

Up next, El Paso Locomotive wraps up its three-game home stretch by welcoming Austin Bold FC to Southwest University Park for a weekend match up. The second-straight Copa Tejas match up is schedule for Saturday, August 7, with kickoff set for 7:30 p.m. MT.

Tickets are available for purchase online or by phone by calling 915.235.GOAL.

ELP: Diego Luna (Dylan Mares), 29th minute: Taking a run right down the middle, Diego lay the ball off towards Mares before quickly running through the open spaces left by the San Antonio defenders switching focus. Mares played the ball back to Luna, creating the opportunity to take one low touch past Matt Cardone and into the back of the net.

ELP: Jose Aguinaga (Lucho Solignac), 47th minute: Fighting at the end line in a scramble for the ball, Lucho kicked the ball back over his head and in towards the center of the box. Matt Cardone at the near post could do nothing but watch as Aguinaga leapt through the air and headed the ball home for the club’s 100th goal.

– Midfielder Jose Aguinaga recorded his second goal of the season, marking the 100th club goal across all competitions just before the break in the first half.

– El Paso Locomotive claimed another win over San Antonio, the second in one week, to vault into first in the Copa Tejas standings and to keep hold of its six point lead at the top of the Mountain Division table.

– Following the win at Southwest University Park, Locomotive is now 17-games undefeated at home including playoffs.

– Goalkeeper Logan Ketterer earned his third clean sheet of the season behind two saves to help secure the full three points at home.