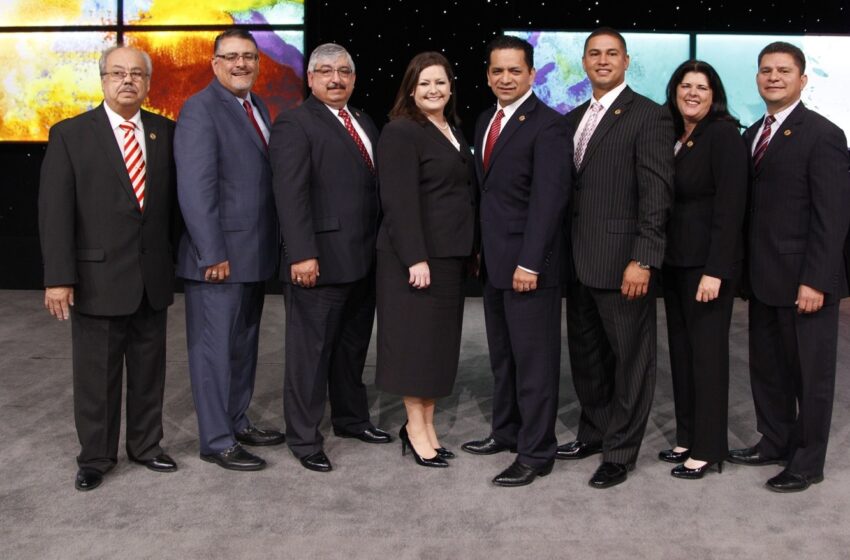 The Socorro Independent School District Board of Trustees was recognized by the Texas Association of School Administrators as a Texas Honor Board on Oct. 2 at the 2015 TASA/TASB Convention in Austin. The SISD Board received a plaque and special recognition for their achievement in the 2015 TASA School Board Awards.

The SISD Board of Trustees was one of five school boards in Texas to be named an honor board. They earned the honor for their commitment to their students and communities, a continued focus on student achievement and improvement, and high ethical standards in leading and governing the school district.

“I couldn’t be prouder to be part of this incredible team of dedicated citizens in our community,” said SISD Superintendent Dr. José Espinoza. “They lead us to greatness in Team SISD. To be recognized as one of the top school boards in the state is an awesome recognition of their hard work and commitment to SISD students, employees, parents and schools.”

The SISD Board of Trustees are Angelica Rodriguez, Board President; Antonio “Tony” Ayub, Board Vice President; Gary Gandara, Board Secretary; Hector F. Gonzalez, Trustee; Michael A. Najera; Trustee; Cynthia Ann Najera, Trustee; and Paul Guerra, Trustee. The board trustees and Dr. Espinoza attended the 2015 TASA/TASB Convention for the recognition from TASA officials.

“We are humbled to earn the 2015 Texas Honor Board award because we are simply fulfilling our duty to the children and families in the Socorro community,” said Board President Angelica Rodriguez. “We care about the future of our students and work diligently to offer the governance and guidance needed to give them the best education and resources.”