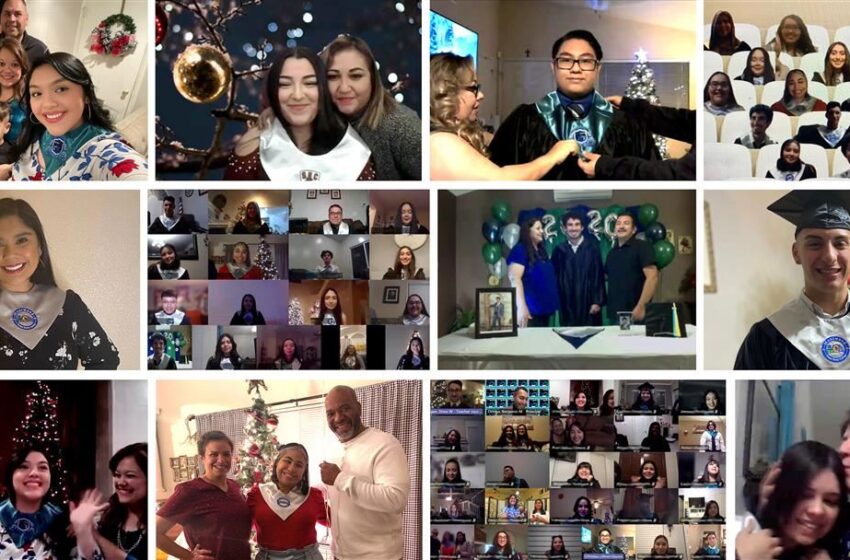 Taking advantage of SISD’s endless opportunities, these students are getting a head start by saving time and future college costs through the SISD early college high school programs in partnership with El Paso Community College.

They have earned a college degree this fall before their high school diploma, which they will finish in spring 2020. Many of them planned to celebrate their achievement in the EPCC virtual commencement ceremony on Dec. 19.

The early college high school programs celebrated virtual stoling and cord ceremonies to honor their graduates before the EPCC ceremony. During the ceremonies, the parents and family members of the graduates placed the stoles and cords on their children and said a few words of congratulations to the graduate before passing it over to the next student.

“These students have worked so hard for this moment,” said Carlos Sandoval, TEC director. “From sleepless nights, to missing out on fun stuff, they were focused on achieving this goal, and they did it.”

The Trailblazers graduates worked hard and were proud of themselves for their milestone achievement.

“I think it’s awesome that I have my associate degree at such a young age,” said Jahsmyne Rice, senior at Americas High School. “Not too many people can say that, and it feels so rewarding.”

Twenty-six Socorro Early College students received their stoles during a virtual ceremony Dec. 16 where they celebrated with their peers and family members.

“These students inspire me more than I inspire them,” said Desi Gonzales, director of Socorro Early College. “They are resilient, and they never give up, despite all the challenges faced this year, they still managed to make it through to graduation.”

Parents placed the stoles and cords on their children as they were given a brief spotlight on camera during the virtual ceremony.

“I’m just so happy to be here right now, even if it was virtual,” said Socorro High School senior and SEC graduate Alyssa Quintela. “My teachers and principals still managed to make us all feel special during these times.”

Many of the students overcame various obstacles to earn their associate degrees, putting in many hours and dedication to achieve the milestone.

“Most of my obstacles had to be to find the perfect balance between college and high school classes,” said Socorro Early College student Paola Diaz, who also participates in orchestra and flags. “It was definitely a challenge but I somehow managed to overcome it.”

Mission Early College High School honored their students alongside their family members who placed the stoles on them in a virtual ceremony Dec. 16.

“We are so proud of these students,” said Drew Dungan, journalism teacher at MECHS. “Stole, no stole, stole in the future, it doesn’t matter, they got the degree, and they will forever be part of the Phoenix family.”

MECHS had 33 students complete their degree in the fall and summer, most of them participated in the stoling ceremony in December.

“For me the stress was well worth it,” said MECHS senior Christian Rivera. “The number of things I was able to tackle makes me feel so accomplished and I have to say this is by far a wonderful school I have gone to.”

Twenty students at Rams Early College earned their associate degree this fall and are ready to continue their education and pursue career aspirations.

“It was a great feeling,” said REC director Orlando Hairston. “These kids have been through so much, and just to see the perseverance of them really makes me proud as an educator.”

This is the second year REC celebrated their students who completed the program.

“It was very exciting to get a ceremony,” said Marisol Hernandez, a senior at Montwood High School. “When this pandemic happened, we had no idea what was going to happen, but I am very grateful that we could still celebrate and get our stoles.”

SISD, in partnership with EPCC, offers the most early college programs in the region with a program at all comprehensive high schools in the district.