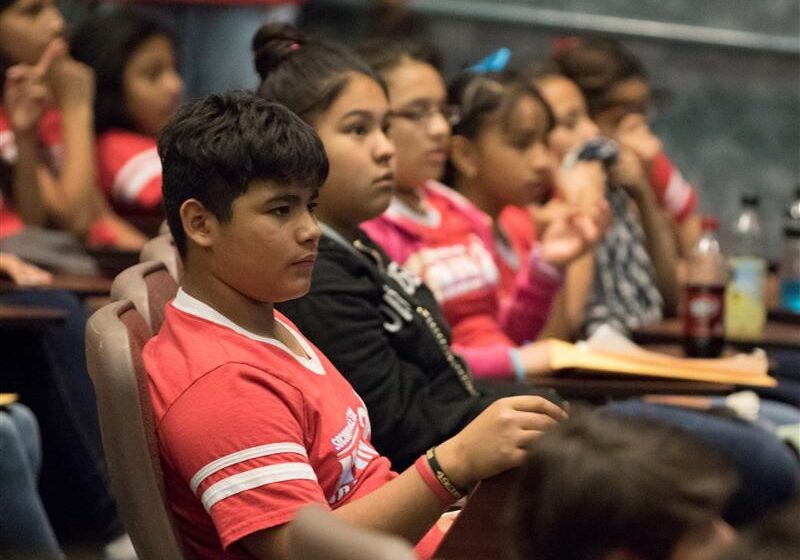 More than 350 elementary and middle school students, who are enrolled in the district’s WIN Academy, had a graduation of sorts from the Tech-E program, a year-long interactive computer programming session at the University of Texas at El Paso.

Each child received a certificate and congratulations from SISD Superintendent Dr. José Espinoza and UTEP officials, who partnered with Team SISD to provide the innovative the Science, Technology, Engineering, Arts and Math classes.

The Tech-E program began in the fall 2016 to demonstrate and create opportunities for Team SISD’s WIN students to develop skills in STEAM.

“It’s been incredible,” said Alisa Zapata Farmer, SISD’s Chief Academic Officer. “Not only does this teach students about technology and science, they get to see what it’s like to be on a university campus. They’ve learned about working together. They learned about creativity, teamwork and critical thinking. We are so thankful they are partnering with us.”

Tech-E has been such a success that next year two to three more schools will be added to the program, Farmer said. Socorro Middle School, Desert Wind School and Mission Ridge Elementary School students participated this year.

“We want to expose more students to the program,” she said. “It’s such an important aspect of learning for today’s student.”

The current cohort of students will continue the program and a new group will start next school year.

“It’s been very successful,” said Pedro Espinoza, an instructional technologist in UTEP’s academic technology department. “It grew from a small summer camp into this big program with the Socorro Independent School District. We are happy to have them here. We hope that in the future we can make this program grow even more.”

The WIN Academy, which stands for Work hard, have an “I can do it” attitude, and Never give up, is an award-winning SISD program designed to help vulnerable children succeed in school and close achievement gaps among students across the district.

With the Tech-E program, WIN students were exposed to a wide range of technologies so they will be better prepared for a career and/or future choices in STEAM fields with real-world, hands-on experience.

“Every field that is out there and even those coming that we don’t even know about in the next five to 10 years have technology, science, engineering, arts and math embedded in them in some way,” said Mike Pitcher, Tech-E coordinator and UTEP’s director of academic technologies.

During the year-long program, students also learned about the importance of cyber security, how to use a 3-D printer and how to build, program and play games on a Raspberry Pi, a credit-card-sized computer that plugs into a keyboard and monitor.

On their last day, they participated in different activities and challenges that tested not only their science abilities, but their math as well.

“They were able to implement anything they have learned and benefitted from the program and take it to the next level,” said Irene Guerrero, a fifth-grade WIN Academy teacher at Mission Ridge. “They were able to complete different tasks and compete for points.”

Students have learned how to apply different skills in STEAM, but more importantly, they learned about teamwork.

“They know how to collaborate with one another and at the same time learn about STEAM along the way,” Pedro Espinoza said. “The program is conducted in a fun and engaging way.”

Guerrero believes Tech-E is an essential program that will have long-term benefits for students.

“The students love it. What they have learned here, they are able to not only apply to the classroom, but also to real world situations,” Guerrero said. “And it is getting them ready for college. Understanding what is it I like to do? Where am I at right now? Where do I see myself in the future?”

Fifth-grader Jesus Valenzuela likes relating what he has learned at UTEP to math class. He hopes to return to the program next school year.

“It’s absolutely awesome,” Valenzuela said. “It’s great because we have a myriad of advantages that other students don’t have. I wish other kids could have also had it.”