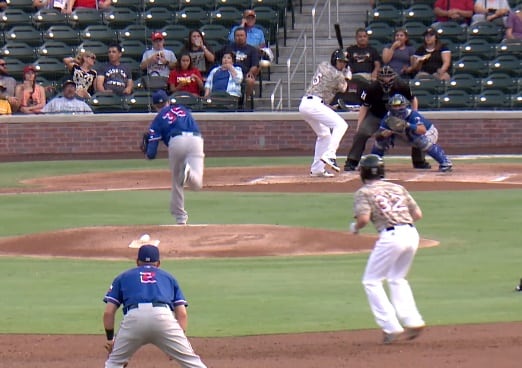 The El Paso Chihuahuas dogpiled the Round Rock Express 10-3 and jumped three and a half games ahead of the Salt Lake Bees in the PCL Pacific Southern Division.

The Bees lost 5-4 to the Omaha Storm Chasers after the game was called – coincidentally because of a storm – in five innings.

The Dogs went through the entire lineup and wasted no time at all pounding Express starter Tyler Wagner (4.83 ERA) for five runs in the first inning.

The Express answered meekly in the fourth inning with one run, after stringing some hits together. Round Rock could have gotten back into the game with the bases loaded and one out, but the strong El Paso infield turned a 5-4-3 double play that got Chihuahuas starter Cal Quantrill (3.00 ERA) out of the inning, El Paso 5-1.

The Express added another run after consecutive doubles in the sixth inning before the Dogs sat them down in order with groundouts, El Paso 5-2.

The Chihuahuas then walked their way to another run in the sixth after three base on balls and a hit batter. The bases were loaded with one out for DH Raffy Lopez (.282 BA) who grounded out to the third baseman but still managed an RBI, El Paso 7-2.

Round Rock’s last run was scored on an RBI single to left field that rolled all the way to the wall, El Paso 7-3.

The Chihuahuas loaded up the bases in three innings, the last time in the seventh. The Express faced the entire lineup and again walked three hitters, but this time only gave up three runs, El Paso 10-3.