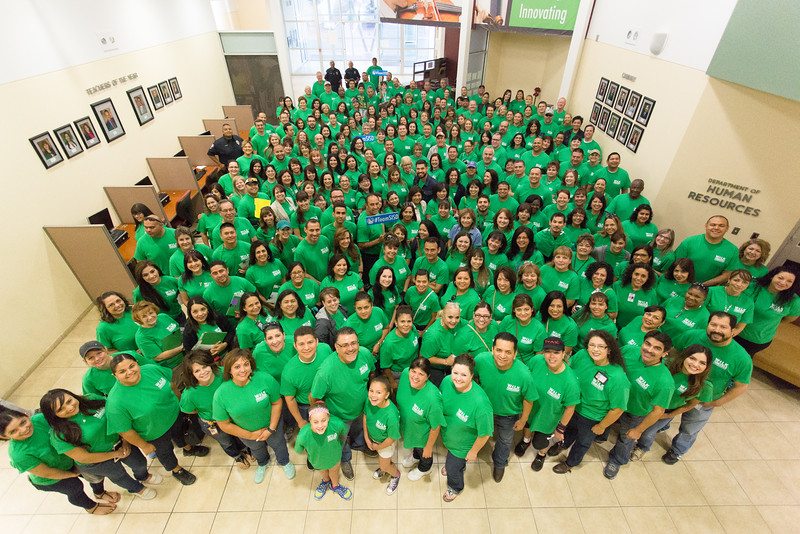 Some 300 Team SISD educators walked the district’s many neighborhoods on Sept. 19 to reach out to students who have left school and encourage them to return to school.

The second annual SISD Walk for Success, which included SISD Superintendent José Espinoza, board members, principals, and other staff members, was a districtwide effort to recover students who have left and help them re-enroll so that they can graduate from high school.

“It means a lot to a student that someone would care enough to show up at their door and encourage them to return to school,” Dr. Espinoza said. “We want them to come back home.”

Team SISD talked to numerous students who appreciated them coming to their homes and also connected with many parents who opened their doors to them.

“We contacted a lot of students and parents and we were able to leave them with great information on how to come back to school,” said Corey Craft, SISD School Compliance Officer.

Team SISD members were reaching out to 300 students in the walk event. Team members were divided in groups to visit neighborhoods in each high school feeder area in the district. They made every effort to talk to the students themselves or family members who may know where the students are, and explain to the students how to come back to school and the assistance that Team SISD will provide for them.

Victor Escalante, who dropped out his junior year, never expected to find Superintendent Espinoza and Eastlake High School Principal Gilbert Martinez at his door to encourage him to return to school.

“I am shocked,” Escalante said. “Having their support and coming to my house really makes a difference. I never expected this.” Their inspiring support made such a positive impact on the young man that he plans to show up at the high school Monday ready to start again.

“I know without school you can’t get a better job,” said Escalante, who wants to be a diesel mechanic. “With school, you find better jobs and better opportunity. I need to finish my education.”

Martinez was delighted to connect with Escalante again and happy that he agreed to come back to school. Students need to know to keep working hard and that Team SISD is here to support them, he said.

“You have to come back up, you have to keep fighting, don’t ever give up,” Martinez said. “We’re all here to help. It takes everybody to come together to help our students to be successful.”

Jennifer Chabre, a Paso del Norte School counselor, was able to talk to a young man who had returned to school last year, but then dropped out again.

“He left again to help his family,” she said. “He got emotional when he saw us because he wants to come back. We were able to help and guide him to return to school. We showed him how he could do both: go to school and work and be successful in life.”

A precursor for the 2015 Walk for Success began on Aug. 29 as SISD counselors and school and district staff conducted a call-out to reach out to students. As a result of the call-outs, nine students have re-enrolled in SISD schools.

The phone calls also helped identify and locate many other students who already have enrolled in schools in the area or out-of-town. More than 500 phone calls were made during the call-out event.

“In my opinion, as long as we get one student back we were successful, but we are aiming to get all 300 students back to school,” Dr. Espinoza said. “No matter what has happened in their lives, we are not going to give up on them.”