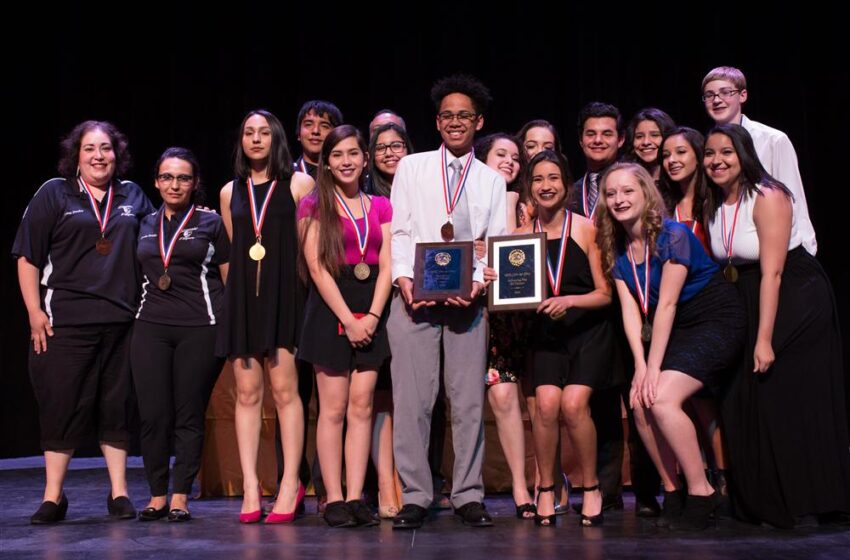 Montwood and Socorro high schools excelled at the recent University Interscholastic League 1-6A High School One Act Play competitions, having advanced to the bi-district and area competitions.

The SISD schools competed at the bi-district contest on March 23 and 24, and have advanced to the area competition on April 7 in Midland.

“Our two schools were the best there,” said Don Rominsky, SISD director of fine arts. “They deserve to go to area.”

SISD hosted both the 1-6A and the 2-5A One Act Play contests for the El Paso region the week of March 14. Eastlake and Pebble Hills high

schools competed in the 2-5A contest.

“(Montwood and Socorro) plays were well organized,” said Don Rominsky, SISD director of fine arts. “The students knew what to do. When you make it to this level, you aren’t just being judged by the other plays here. You are being compared to every play in the state.”

One Act Play competition is not easy, he said.

During the 1-6A contest, Montwood staged “Candid” by Michael Scanlan. The play is about a young student photographer, T.J. who chronicles the break-up of his family after his mother walks out. The demise of the family and its devastating effect are captured in dramatic and photographic flashbacks.

“This is surreal,” said Evanie Gamboa, the Rams’ drama instructor. “This is an honor. We competed with some of the best people in the district.”

This was Gamboa’s first time as a UIL director. The “VIVA El Paso” veteran was excited to be among other district instructors. She hoped her students learned about themselves as actors, picked up new techniques and grew in their craft.

Socorro High School theater teacher Troy Herbort, who has been participating in UIL for 24 years, directed the student cast that performed “The 39 Steps.” Written by Patrick Barlow, it is about a man with a boring life who gets caught up with a spy, who is murdered. Soon, a mysterious organization called “The 39 Steps” is hot on the man’s trail in a nationwide manhunt that climaxes in a death-defying finale.

With the intense, but humorous play, Herbort knew his students were ready to give it their all.

“I love this,” he said. “My kids worked so hard. They enjoyed working with each other. I think advancing is just the icing of all we’ve been doing.”

Socorro student Jessica Fernandez said the “39 Steps” cast’s intention was to leave everything on stage.

“There was no going back,” said the senior, who has been to UIL four years in a row. “We hoped for the best.”

“Sean White made people cry,” Rominsky said. “He was that good.”

At the bi-district 1-6A One Act Play contest, the individual results included Montwood’s White once again earning the best actor award; Armando Veloz and Jessica Fernandez, both of Socorro, were named to the “All Star Cast;” Katie Balderama, Montwood, and Herbort and Torres, both from Socorro, made the “Honorable Mention All Star Cast.”

In addition, Socorro High School’s technical crew was named tops and also were recognized for its sound and lighting.

While no Socorro schools advanced in the District 2-5A contest, three students were recognized for their performances. In addition, this was Pebble Hills High School’s first time competing in the UIL contest.

“We were very excited,” said Israel Boswell, Spartans’ theater director. “This has been a great opportunity for the kids. I wanted them to see what the next level was because there is a big future for them.”