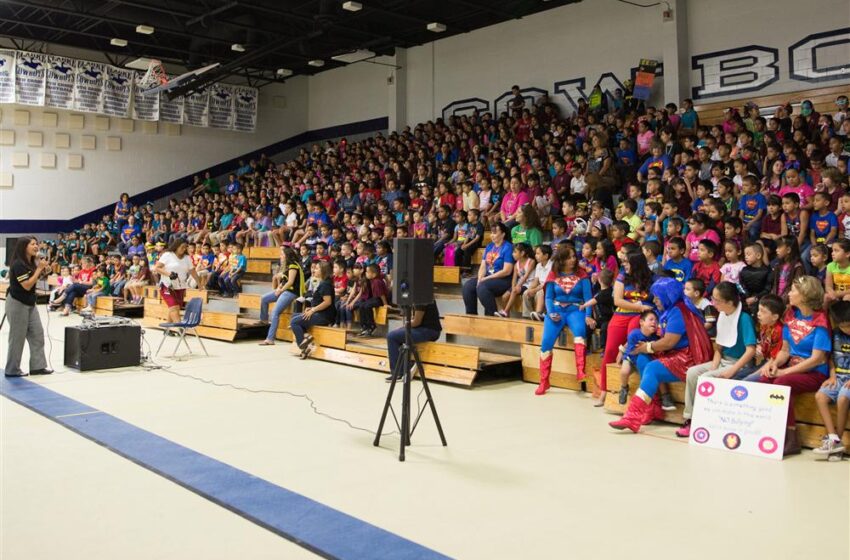 With safety being a top concern for the Socorro Independent School District, educators in all schools are continuing anti-bullying efforts and have seen a decline in bullying issues.

The success can be attributed to the Olweus Bully Prevention Program, a nationally known program that has been used districtwide for several years. Designed for students in elementary, middle and high schools, it has been proven to prevent or reduce bullying in a school setting.

Each year, SISD schools find new ways to promote the program. There are assemblies, rallies, parades and community pizza nights.

The purpose of the program is to reinforce in the student’s mind that bullying isn’t acceptable under any circumstance, said Bert Sherwood, the Olweus campus coordinator for Paso del Norte School.

“The awareness certainly has increased and bullying has decreased,” said Sherwood, who plans to kick off Paso del Norte’s Olweus program in September.

Sierra Vista had a school-wide assembly on Aug. 18. Using Superheroes as the theme, teachers and administrators dressed up as Superman, Superwoman, Bat Girl and many other cartoon characters.

“Be a hero not a bully,” said Principal Christine De La Cruz, to her students. Angely Correa, a first grader at Sierra Vista, said it’s not nice to be a bully.

“I don’t like that,” Correa said, during the assembly. “We have to stop all those who are bullying students. We have to help our friends who are being bullied.”

Her teacher, Cecilia Murphy, is proud that her students understand the philosophy behind Olweus. During the past few years, she has seen bullying decrease.

“Olweus teaches them what bullying is,” Murphy said. “Kids before didn’t know anything about bullying. It was just accepted. Kids didn’t know what to do. That’s all changed for the better.”

Since the start of the new school year, SISD campuses have been reigniting the Olweus Bullying Prevention Program to maintain a stop-bullying awareness among students, parents and the community.

At Capt. Walter E. Clarke Middle School, the 2015-2016 Olweus rally featured numerous events. With “Clarke: We hit it out of the park” theme, students played games, cheered for their grade, and went wild when the Chihuahua’s mascot, Chico, showed up.

“We believe that if students work together as a team, there will be less time for bullying,” said Kyia Whiteman, one of the coordinators of the program.

Eighth-grader Paola De Lucio has been learning about bullying prevention in the Olweus program since she was in the first grade.

“I think it is important that kids know what’s going on in their school,” De Lucio said. “The school doesn’t tolerate any bullying.”

If your school is having Olweus events, please email pdiaz03@sisd.net.