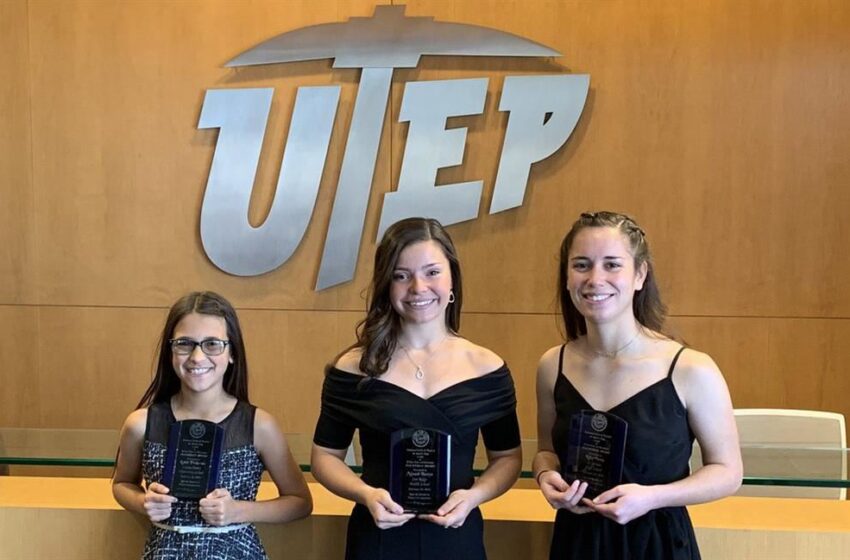 The three SISD student-athletes that won the awards were Kylah Dickerson, fourth-grade student at Lujan-Chavez Elementary; Nevaeh Buntyn, an eighth-grade student at Sun Ridge Middle School; and Riley Perez, a senior at El Dorado High School. They were among 51 female athletes in El Paso nominated for the recognition that is awarded in three categories – elementary, middle, and high school.

The award pays tribute to Flo Hyman, who was captain of the 1984 U.S. Olympic volleyball team, brought worldwide recognition to the sport, and took an active role in promoting opportunities for women athletes.

“It’s honorable to be compared to her (Hyman),” Buntyn said. “She was a phenomenal woman who pushed through even when she had obstacles. She has inspired me to be the best person I can be. It’s amazing to know I won the award because of who I am. I love sports and I love helping people around me. If a friend is in need, I will make sure they are OK.”

This is the second time Buntyn was nominated for the award. The all-around athlete runs track and field, plays basketball, softball, and football, in both defense, offense and special teams. The straight-A student goes above and beyond to help her community, and is involved in numerous clubs and organizations, such as Destination Imagination, orchestra and piano.

Buntyn plans to join the military after she graduates from high school so she can serve her country and community at another level.

Dickerson is a two-time recipient of her school’s Physical Education Student of the Year award. She has participated in gymnastics, basketball and volleyball, and is a member of the El Paso Striders running team where she competes at local, regional and national level competitions.

She is also an active member of her community and volunteers at her local church. She assists with placement of flags at Fort Bliss National Cemetery during Memorial Day, and volunteers at the Mighty Mujer Triathlon. She, along with members of the Destination Imagination Team at her school, collected Christmas presents for a senior center and sang carols to the elderly when they delivered the gifts.

“It’s very important for me to help others and I feel proud when I do,” Dickerson said. “Being young and winning this award will motivate people to support others, because if I can do it, you can do it, and anyone can do it.”

Perez is a three-year team captain of the El Dorado soccer team who holds a grade point average of 101.3. The standout athlete has led her team to two bi-district championships, and one district championship. She also is president of the IB Your Friend Club, and an officer for the UNICEF Club. In addition, she volunteers in various community organizations such as Trunk or Treats, El Pasoans Fighting Hunger, and Kids 4 Cleats, where she coaches young athletes in the community.

“It was exciting to be recognized at the banquet and meet some of the younger athletes,” Perez said. “I’m honored to have won and I will continue to do my best to lead by example and be a leader on and off the field.”

Perez earned an academic scholarship with Our Lady of the Lake University where she plans to further her leadership skills on the field and in the classroom. She plans to major in biology, go to medical school and come back to El Paso to give back to her community.

The students were recognized at a special banquet and at the UTEP basketball game on Feb. 23.