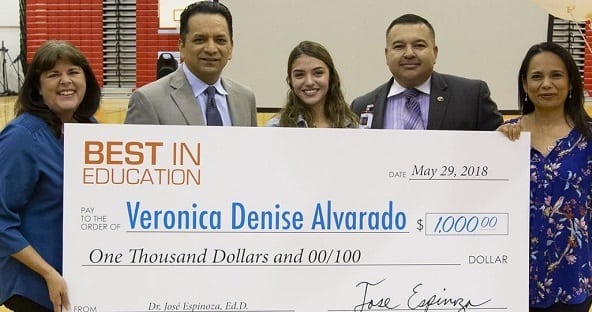 The seniors were awarded $1,000 each to use toward tuition for the college or university they will attend in the fall of 2018.

A $5,000 scholarship also was awarded to a Socorro Middle School WIN Academy student for his outstanding performance in school, including living up to the philosophy of the WIN Academy – Work hard, have an “I can do it” attitude, and Never give up.

The essay contest celebrated the academic excellence in Team SISD, which was showcased nationwide when SISD Superintendent José Espinoza won the Escalante-Gradillas Best in Education Prize in October 2017. Dr. Espinoza and Team SISD earned the national recognition for doing more with less, overcoming obstacles, boosting student achievement levels, and raising the standard of excellence for SISD schools and the district overall.

“In our school district we treat and educate our students as if they were our own children,” Espinoza said. “We don’t want finances to be a reason for any of our students to not attend college and further their education.”

WIN Academy student Simon Ubanda, an eighth-grader at Socorro Middle School, was awarded a $5,000 scholarship, also to use for college or university costs when he graduates from high school.

The graduating seniors who won the contest wrote essays that addressed the question: How have you or your family done more with less?

“Reading all the stories was really touching,” Espinoza said. “Our students have overcome many struggles and challenges but they continue to persevere. No matter the challenge, they work hard to jump that hurdle, and I know they all have bright futures ahead of themselves.”