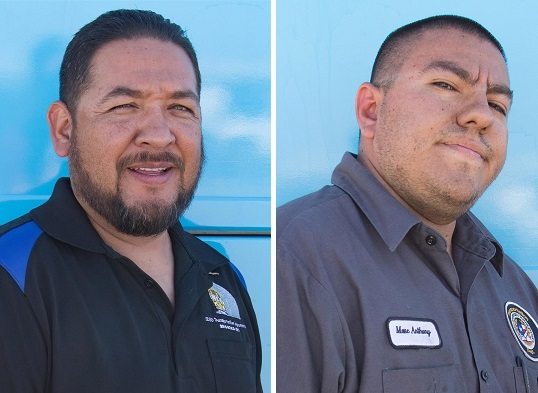 Marc Anthony Villa, an SISD mechanic, and Alejandro Garcia, an SISD bus driver, are advancing to the state competition after earning first and third place in the 2016 School Bus Safety Road-eo contest. They were tested on a driver’s knowledge and skill with a written test and a driving obstacle course in the contest.

“We are very proud of them,” said Judy Moore, operations route specialist.
“This is a hard competition…for them to earn first and third place says a lot about them and it shows that we have the best drivers in the area.”

Villa and Garcia have both earned first place in previous years and aim to keep the winning tradition alive.

Villa has earned first place in the transit category three out of the five times he has entered the contest. The mechanic said he takes pride in his job because it ensures students are being transported to and from school safely. He also enjoys driving the school buses every day.

“Coming back with another first place is awesome,” Villa said. “It’s an honor to represent Team SISD at the state level and prove to myself that I can drive a school bus and transport our kids safely.”

Garcia, who earned third place this year, said he agrees that safety is the number one priority. The driver of bus No. 43 also said the competition allows transportation employees to learn a lot.

“I want students to be safe,” Garcia said. “By participating in these competitions we get more experience and we become better drivers…we get better at what we do.”

The two Team SISD employees will compete against 100 bus drivers from across the state in events which test for driving skills and abilities, such as maneuvering a school bus in and around various driving obstacle courses. The featured events are timed and rated through a point system.

“I scored 569 at the road-eo competition and my goal is to earn 600 points at this next competition,” Villa said. “I want to bring home the gold.”

El Paso Herald Post
Get our web app. It won't take up space on your phone.
Install
See this post in...