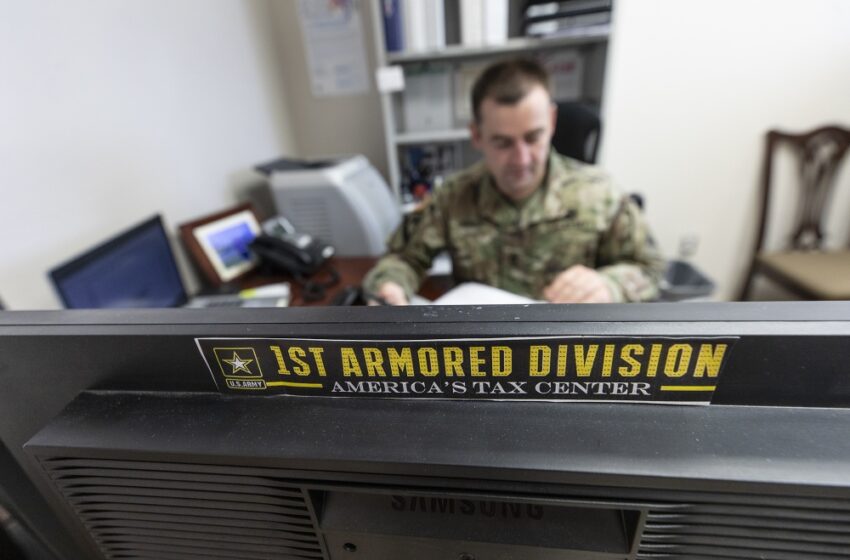 Last fall, Sgt. 1st Class Daniel Weber, a 47th Brigade Support Battalion maintenance operations NCO, was most likely under an oiled machine somewhere on East Fort Bliss, with tools in hand, when his sergeant major asked him what he thought of his new position.

“I had just started a new position over at [2nd Armored Brigade Combat Team, 1st Armored Division],” he said, “so, I was like ‘Yes, sergeant major, things are going great.’”

Then the sergeant major told him of his “new-new” responsibility — Fort Bliss Tax Center noncommissioned officer-in-charge.

“He told me about my ‘new-new’ position,” Weber said with a good-humored laugh from his temporary cubicle on West Fort Bliss. “I’m like ‘what?’”

Although the Tax Center is a Fort Bliss Office of the Staff Judge Advocate effort, it’s supported by units base-wide. Located at 2910 Cassidy Road on West Fort Bliss, the center, which opened Jan. 21, had been in operation behind-the-scenes since October 2018.

“We did self-development just to familiarize ourselves with Tax Law lingo,” Weber said, “so that when January came and we were supposed to get official (Volunteer Income Tax Assistance) IRS training, we knew the type of questions we wanted to articulate — but that didn’t happen.”

Due to the January federal budget, which affected more than 20,000 IRS employees over a 35-day period, Weber said the group didn’t have a viable connection with their VITA contact in the IRS field office in nearby El Paso.

“It sent us into a bit of a panic, because we were depending on that continuity with our IRS contact who was in charge of all of the VITA sites in El Paso,” he said, adding that while they were able to study a lot of the materials, when questions delved into areas beyond the basics, they had no subject-matter expert to turn to.

It was a timely intervention from Dallas tax attorney Charolette Noel, who specializes in estate taxes, who flew to Fort Bliss to assist troops in certifying as preparers.

Soon after the attorney arrived, all members of the group were ready to certify in all tax preparation areas — because in the uncertainty of the January budget, the only thing Weber and Nguyen felt like they could be sure of was to be the value of the preparers being experts when the IRS eventually was fully funded.

“She spent four days with us and walked us through general topics like categorizing expenses and income; that gave everyone a pretty in-depth perspective,” Weber said. As the budget resolution passed and connections were re-made, the workflow has been steady ever since as the center has filed more than 1,400 returns as of last week.

Weber, a self- described “ordnance, support type” said although he wasn’t gung-ho about the idea of managing Soldiers and tax preparations when he first got the call last fall, it’s been a good experience so far because he’s been able to see a bigger picture of the Army team, beyond his spaces on East Fort Bliss.

“Working with a bunch of [Soldiers and civilians from other job fields] has been great,” he said. “It helps my perspective. In this position, I’m getting the opportunity to pick their brains and see what their military careers have been like.”

He also said he’s benefitted from the tax law lessons. Although the Tax Center NCOIC is a one-time, annual position, and he said he will now do the work needed for his own family’s tax returns, beyond a simple return, in the future, rather than paying a specialist.

But as NCOIC, he said his crew of 22 Soldiers, down from 30 last year, have been fully vetted and continue to serve the base Monday through Saturday with certified expertise. Weber and Nguyen have split the team into morning and afternoon shifts, with a healthy overlap in the mid-day to serve customers and ensure a good turnover with the morning crew.

Despite the smaller team overall, their extensive certifications and their continued management of a heavy workload have proven that, despite real-world challenges, the team of “ordnance, support types,” infantry Soldiers, lawyers, lab technicians and more continue to work together to complete the mission — bringing beneficiaries high-dollar tax service at no charge.

“The [preparers] that are doing the best are the ones who normally don’t do [desk work] in their daily lives,” he said. “They’re getting on it and getting focused on it — they’re doing really well.”