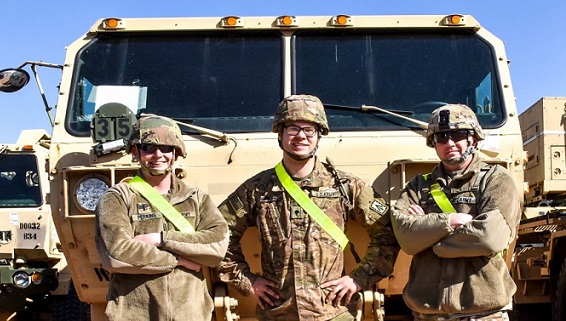 “We expect to hit the ground running real hard,” said 1st Lt. Luke Huston, a fire control platoon leader from Alpha Battery. “We are going to certify our crews and make sure we are good to go!”

Prior to Soldiers embodying the Army strong ethos, they prepare equipment and train platoons and crews in the field. Simultaneously, these warriors conduct table eight qualifications along with honing core-competency skills.

“We have to make sure everything is clean and functioning correctly before we move any equipment down to the railyard,” said Spc. Nicholas Myhre, a patriot operator/maintainer from Bravo Battery, who executes majority of the groundwork. “At the railyard, we load it up, chain it down and maintain accountability of the equipment as it is loaded. Once the equipment arrives, we unstrap, refuel and stage everything in the snake pit.”

Roving Sands was restored in the spring of 2018 after being dormant since 2005. Brig. Gen. Christopher Spillman, former commanding general for 32d AAMDC, brought the exercise back to the planning table in order to provide training in a realistic environment.

Humble beginnings at the brigade level led to the exercise becoming the capstone Joint Theatre Army Missile Defense training in the world.

“This is a great opportunity for us to familiarize ourselves with our roots and where patriot comes from,” Myhre added. “This is a good learning experience for a lot of us!”

Chief Warrant Officer 2 Paul Murray, an air and missile defense system technician from 3-4 ADAR, whose primary role is making sure the patriot system is mission ready and functional at all times offered a similar sentiment.

“It is going to be good to run the equipment in a similar operating environment deployed, because this does make a difference in how the system runs,” Murray stated.

Following in his predecessor footstep, Brig. Gen. Clement S. Coward Jr., assumed command of 32d AAMDC in December of 2018. He prioritized the capstone event and made it an annual training requirement.

Roving Sands will test the units’ ability to conduct air defense, as well as test their maneuvering capabilities.

“We have our team here and we know that this is dedicated training time,” said 1st Lt. Eric Perkins, a unit movement officer from Bravo Battery.

The leaders of 108th are excited to bring their Soldiers and equipment to the high desert to execute world-class training.

“The biggest thing that we are going to get out of this exercise is experience,” Murray noted.

“I love this exercise and I love being in the field,” Perkins concluded. “Being out in the field gives us the opportunity to learn as much as we want about the system. The amount of work that you put into it is what you get out of it. If you use this time the way that you want to, you will get a lot out of it.”

With the month of March slowly approaching, 108th will get the chance to live out their motto: “Deeds Above Words.”