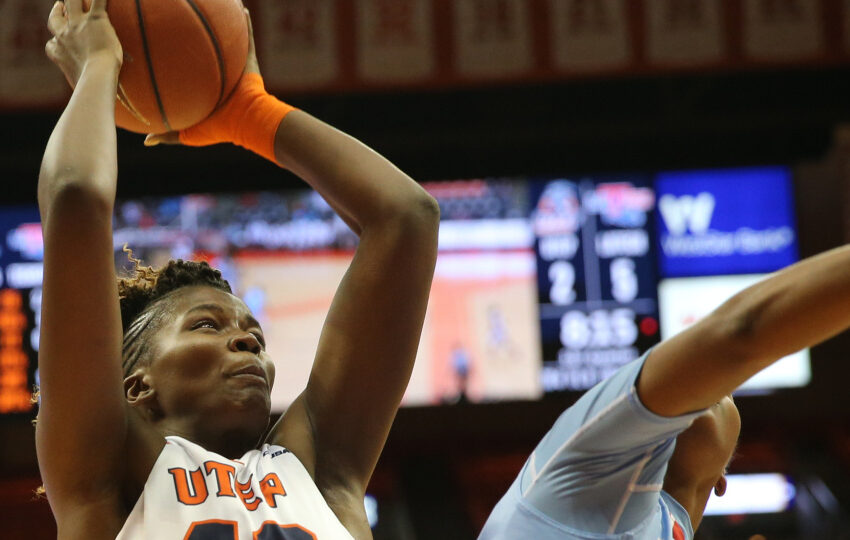 The Lady Eagles’ athleticism also caused fits for the Miners, who were harassed into 22 turnovers that resulted in 30 points. USM also had slight advantages for points in the paint (40-32) and fastbreak points (22-16). Bench scoring (15-14) and second-chance points (7-6) went UTEP’s way.

“It was a rough day but you gotta give Southern Miss credit for their defensive pressure,” UTEP head coach Keitha Adams said. “It is very disappointing. We were climbing up hill over the day but couldn’t get over the hump.”

Southern Miss scored the first four points of the game before it went back-and-forth over the next several minutes, with the visitors leading only by three (10-7) with 3:07 to play in the quarter. Unfortunately that changed with a 6-0 spurt to put the Miners down by nine (16-7) with1:20 left in the frame.

UTEP regrouped and started to find some momentum early in the second quarter, using consecutive baskets by Seda to get within four (20-16, 8:19 2Q). The margin remained four (28-24, 5:52 2Q) after a driving lay-up by Howell but Southern Miss found another gear and was able to reinstate a nine-point lead (38-29) heading to the locker room.

The home side surged out of the gates to start the second half, using a 13-6 surge to climb all the way back within two (44-42, 5:46 3Q). The Miners had a chance to tie it after Taylor came up with a steal but Howell’s transition jumper didn’t fall. USM eventually pushed it back out to five but Howell sunk a triple. Once again, though, USM had an answer, this time by tallying five straight.

Jumpers by Puc and Taylor got it down to three (52-49) late in the frame. The Lady Eagles didn’t flinch, wrapping a 16-8 run around the end of the third and start of the fourth quarter to grab an 11-point lead (68-57) with 5:03 to play in the contest. UTEP continued to play hard and battle down the stretch, but it could get no closer than six the rest of the way.

The Miners will now turn their attention to preparing to play three straight and seven of the next nine on the road. Up first is a trip to the “Sunshine State,” with the Miners set to play at FIU (5 p.m. MT, Thursday) and at Florida Atlantic (3 p.m. MT, Saturday).Tim Hagerty will have the call for both games on 600 ESPN El Paso.