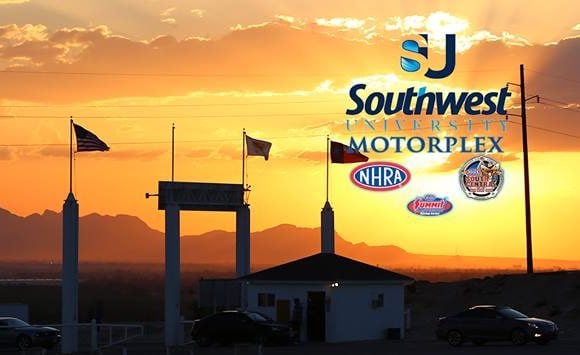 Drag racing returns to the borderland as the newly-named Southwest University Motorplex is set to kick off their 2018 season.

According to track officials, “Southwest University is the first Technical College to take an active roll in supporting and promoting the sport of drag racing.”

The NHRA sanctioned facility, located in Clint and just off of I-10 and is celebrating its opening day this Saturday with the first round of the 8 race NHRA Summit Racing Equipment Sportsman Series which features competition in the Super Pro, Pro, Motorcycle, Street and Junior Dragster classes as the racers vie for both points and prize money.

On Saturday the track will open at noon for racers with time trials running from 2-4 pm followed by the Dash 4 Cash and class eliminations beginning at 5pm.

Spectator tickets are $12 with discounts for Seniors and Military and children 12 and under get in free!

The track is also open every Friday night, weather permitting, for the NHRA Street Legal Drags where – as long as the participant has a car and a valid drivers license – they can run their vehicles down the track, as many times as they’d like, between the hours of 8pm til midnight.

Spectator pricing is $7 per person $5 with Military ID and Racers pay $25 and $20 with a Military ID!

On Wednesday April 25th the track will be hosting its first Street to Track Night and like Friday nights, is intended to curb illegal street racing and allows everyone to race for only $10. Spectators pay only $10 per carload.

The races will be run from 8pm til 2am and all food at the concession stand will always be half price on Wednesday; nights coolers are always allowed but no glass bottles are allowed.

TxDOT Closures for the week of June...