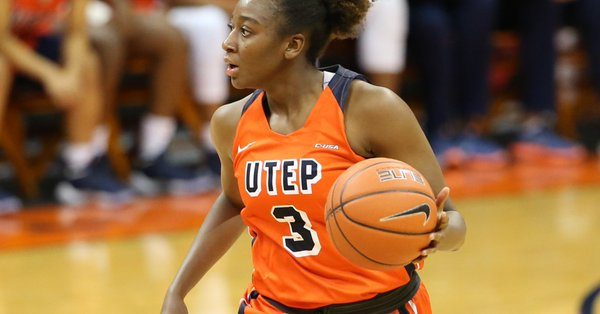 The Miners were clicking on all cylinders early with a 22-point first quarter, which helped propel them to a 35-27 advantage at the half. The visiting Rattlers came out firing after the break, eventually pulling ahead by 12 (61-49) with 7:36 to play in the game.

UTEP scored the game’s next 10 points to help fuel a 13-1 run to even the tilt at 62 with 2:25 remaining. But St. Mary’s, which finished 21-7 a year ago, received back-to-back triples from Sierra Dixon to decide the game. The long-distance hits were part of 14 on the day for St. Mary’s, including five alone in the final frame.

“I thought St. Mary’s shot the ball very well” UTEP head coach Kevin Baker said. “We were daring them to make shots and they did. In the first half we played a match-up zone, and they scored only 27 points. We wanted to work on some of our man-to-man stuff in the third quarter, because it is a scrimmage for us, to see if we could guard their aggressiveness off the dribble and we didn’t do it very well. We gave up 23 points in the quarter alone, and to their credit they took advantage of it. I hope that our team can figure out a way to grow and get better and maybe we’ll be able to guard a little better when we come out (for the season).”

The Miners shared the ball well with 17 assists on 24 made field goals while also only committing 11 turnovers.

UTEP had 22 points in the opening frame but never scored more than 15 points in each of the final three quarters. It was a different story for the visitors, who were held to 27 first-half points before nearly matching that total (23) in the third quarter alone.

Baker did a good job of balancing the minutes, with all eight Miners who earned playing time logged at least 17 minutes of action.

UTEP will tipoff the 2017-18 in earnest with the regular-season opener against CSU Bakersfield at 1 p.m. MT on Nov. 11.