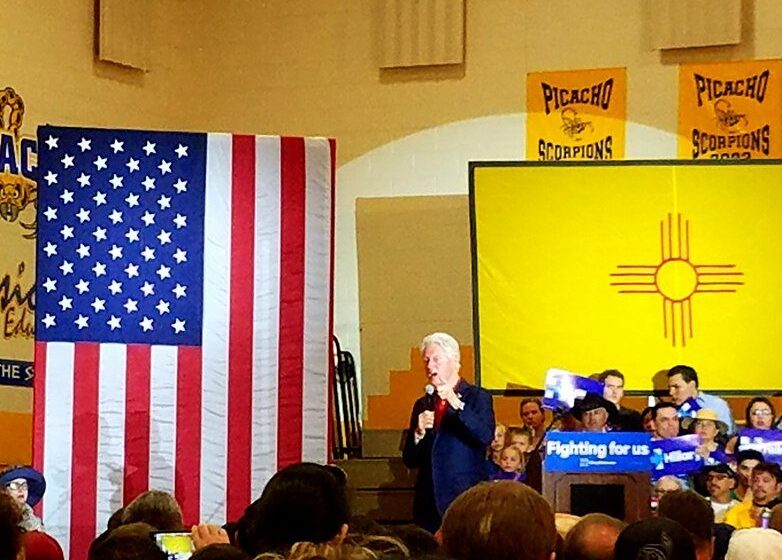 “Hello Las Cruces!” Clinton said in his iconic voice, as he was welcomed on to the stage by a cheering crowd.  Yesterday, former U.S. President, Bill Clinton stopped by Picacho Middle School in Las Cruces, N.M. on the campaign trail for his wife, Democratic presidential candidate, former Secretary of State Hillary Clinton.

The crowd began to line up early in the afternoon waiting to hear the former president speak. Las Cruces police, and secret service were stationed throughout the perimeter, thankfully there were no agitators in the crowd and it was a peaceful rally.

The beautiful sounds of the mariachi was playing and New Mexico leaders kept the crowd in anticipation as each one went to the stage to address the crowd.

Finally the moment arrived that everyone was waiting for and with his friendly wave and warm smile, Bill Clinton took the stage.

The former president had a solid, content-filled speech, going over his wife’s plan with exact points on the agenda. He spoke on the usual points such as, income equality for women and raising the minimum wage, then moved on to points that media doesn’t always run.

included in Hillary’s plan by continuing to build on solar and wind energies.

Clinton also addressed the epidemic of crushing student debt and the solutions provided by his wife’s agenda including restrictions on lenders, loan forgiveness and extending options for those in public service.

He closed by reminding the crowd he has always supported historic New Mexico leaders, and he made history in 1996 by being the first sitting U.S. President to have visited  Las Cruces since William Howard Taft; and that Las Cruces would be part of history once again as they helped to elect the first female president of the United States.

After the rally, the former president stayed available to meet with folks and take photos, and even made a stop at Milagros Cafe before leaving the land of Enchantment.