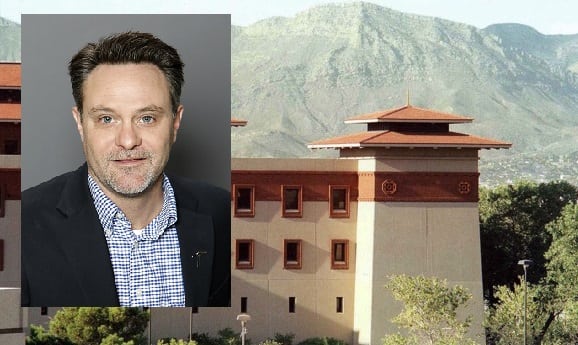 The Texas Educational Theatre Association Inc. (TETA) announced recently that The University of Texas at El Paso’s Ross Fleming was its 2018 Educator of the Year in Higher Education.

Fleming, associate professor of theatre, is head of design: scenic designer/technical director in UTEP’s Department of Theatre and Dance. He currently is a guest professor at Texas Tech University in Lubbock, where he will teach graduate courses in theater design.

The native of San Angelo, Texas, has been a TETA member since 1989 when he was in high school and has taught in secondary and higher education for 20 years. Fleming, who joined UTEP in 2005, said the honor surprised and excited him.

“I sure didn’t see this coming,” said Fleming while taking a break from setting up his office at Texas Tech. “I appreciate the recognition, but the way I see it is I’m a teacher and any success I have is shared equally with my students.”

This is Fleming’s third significant recognition this year. The Kennedy Center American College Theatre Festival (KCACTF) honored him in April with its Gold Medallion Award for his extraordinary contributions to the teaching and producing of theater, and his significant dedication of time, artistry and enthusiasm to develop the festival. It is the group’s most prestigious regional award and is one of the great honors in theater education. The KCACTF also recognized him for his role as technical director and scenic designer for UTEP’s 2018 award-winning production of “Lydia.”

Cristina Goletti, chair of UTEP’s Department of Theatre and Dance, called Fleming a remarkable artist and educator whose passion for teaching and willingness to share his expertise in scenic design have contributed immensely to the department and the binational community of El Paso/Juárez.

“His professional standards and innovative voice as a designer allow our students to train at the highest levels,” Goletti said. “I’m really proud TETA recognized one of our faculty members, which also speaks volumes of the value of the department as a whole.”

Fleming has designed and/or technically directed more than 200 shows at the professional, collegiate, and high school levels. He has designed shows for several regional universities and has continued to work outside of El Paso as a scene designer and technical director. Fleming was the chair of TETA’s DesignFest for several years.

While grateful for every recognition, Fleming said he was most proud of his many former theater students who work throughout the United States as riggers, carpenters, production managers, and theater educators.

TETA will honor Fleming during its annual TheatreFest 2018 September 26-29, 2018, in The Renaissance Dallas Addison Hotel in Dallas, Texas.