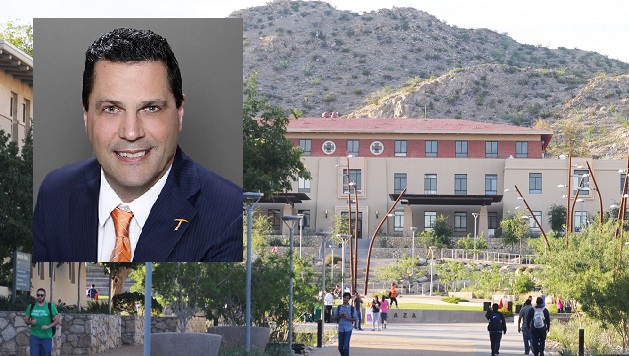 Thursday afternoon, the University of Texas at El Paso announced the appointment of Stephen Crites, Ph.D., as dean of the Graduate School effective May 1.

“Dr. Crites brings a wealth of experience to his role in the Graduate School,” said UTEP President Diana Natalicio. “His background in graduate education and department administration, along with his interim leadership of two doctoral-granting colleges, prepare him well to chart a course for strategic growth in graduate programs at UTEP.”

Crites recently served as the interim dean for the College of Business Administration (COBA) while a search was conducted to replace Robert Nachtmann, DBA, who is retiring.

James E. Payne, Ph.D., was recently named as the new COBA dean in January, and upon his May 1 arrival, Crites will assume his new position as dean of the Graduate School.

Crites succeeds Charles Ambler, Ph.D., who will assist with the transition of leadership at the Graduate School before returning to the history department.

Ambler headed the Graduate School twice for a total of 15 years. During his tenure, he played a notable role in the development of doctoral education on campus and has been active nationally.

“The continued growth of graduate education helps makes UTEP a successful and forward-thinking research institution that is driven by our mission of access and excellence,” Crites said. “That growth is a critical part of the University’s R1 designation. I look forward to continuing the work of Dean Ambler to strengthen graduate education at UTEP.”

Crites joined the UTEP faculty in 1994 after earning his Ph.D. in social psychology from The Ohio State University. His research is in social neuroscience, exploring the processes that underlie attitudes, stereotypes and person perception. His work has been published in Psychological Bulletin, Psychological Science and the Journal of Personality and Social Psychology. He has also received funding from the National Institute of Mental Health.

In addition to serving as interim dean of COBA, Crites has held a number of administrative roles including interim dean of the College of Liberal Arts, UTEP’s largest college, as well as department chair and graduate program director for the Department of Psychology.