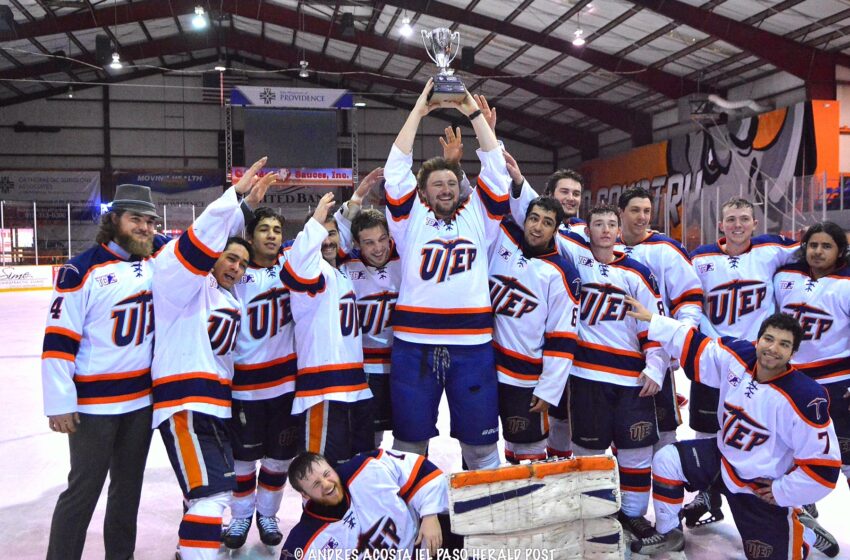 After a season that saw the Miners dominate their division rivals, UTEP rolled into the TCHC Championship game and did the same – blanking Dallas Baptist 6-0 Saturday afternoon.

Coming in to the playoffs as the number one overall seed, the Miners set their sights on being the team left standing at the top. After an incredible 7-1 win over Texas Tech the Miners met Dallas Baptist in the TCHC Championship game.

Back for the 2nd period, the Miners were ready to get the show going as Nick Howell scored the first goal of the game assisted by Jake Colclasure and Jorge Duenas. Shortly after Nick Howell finds the back of the net to put the Miners up by 2 goals. A minute later, Jeramy Rezaeepour added to the total with the help of Dominik Taras and Matt Sanca. Miners led 3-0 at the end of the 2nd.

Heading to the 3rd, only 20 minutes stood between the Miners and the Championship. Brett Bloor got in on the fun and increased the Miners lead to 4. With 5 minutes remaining, Lukas Znosko scored assisted by Dominik Taras and Angel Sanca. Adding an exclamation on the game Nick Howell gets the hat trick with his goal late in the 3rd period.

With a win in the Championship game the Miners await the opportunity to continue the season in the ACHA Regionals Tournament later this month.

Congratulations goes out to Lukas Znosko, Alek Lazarski, and Jeramy Rezaeepour for making the TCHC All Conference Team.

Our very own Andres Acosta was there and brings you his view of the celebration via today’s story in many pics.