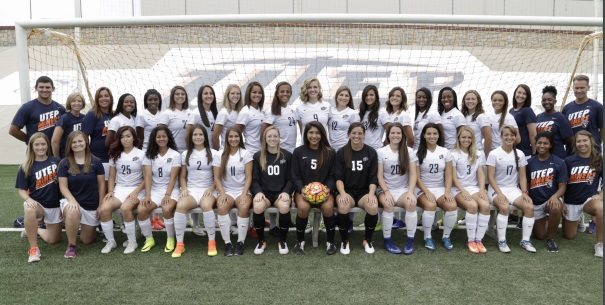 UTEP exploded for four second-half goals on the way to a convincing 5-0 season-opening victory against NM State in the FirstLight Federal Credit Union Battle of I-10 in front of a school-record 1,724 fans at University Field Friday evening.

The Miners (1-0) shared the wealth with Aleah Davis (14:30), Bri Barreiro (45:51), Bri Thomas (67:25), Emily Blaettner (73:07) and Jodie Enokson (84:02) all lighting up the scoreboard. Alyssa Palacios frustrated the Aggies (0-1) with six saves, including five during a frantic first half, while Keighton Allen provided good leadership with her voice in closing out the contest in relief.

Carleigh Simmons, Davis (two), Thomas, Barreiro and Yesenia Contreras each recorded assists in the winning effort. Shots were 11-11 while UTEP held slight edges in both shots on goal (7-6) and corner kicks (5-4), but the tempo was all Orange and Blue, particularly over the final 45 minutes.

“The first half we weren’t pushing our attack like we want to,” head coach Kevin Cross said. “That was the theme of my halftime talk; that we needed to push the attack. We did and good things happened for them. NM State played hard. They’re well coached and they defended well.

“This was a really special night. To have a record crowd out here was incredible. We’re really thankful to Rudy’s Country Store and Bar-B-Q, the media support, the Alumni Association tailgate and our campers. It was incredible out heretonight.”

Facing a stiff wind, the Miners did well to work the ball up the pitch on the ground early. Freshman Danielle Carreon made a good run up the right wing but her cross couldn’t find a home in the eighth minute.

Four minutes later fellow classmate Natalie Valentine unleashed a wicked shot but Aggie netminder Garcia was up to the task. The Miners couldn’t convert on the ensuing corner but UTEP broke through two minutes later. Off a corner kick, Davis elevated above everyone else on the pitch to hammer home a header.

Palacios drew some oohs from the crowd with a beautiful stop on a shot with ample pace by Audriana Chavez in the 18th minute. Twenty minutes later, Palacios somehow kept a point-blank chance by Chavez once again out. The ball was bouncing in the box and Chavez drilled it from six yards away but Palacios dove to the right to make the save.

UTEP, fueled by drums, chants and cheerleaders, carried the 1-0 lead into the locker room but that quickly changed.

At the onset of the second half Davis used a long throw in to get the ball into dangerous area. Thomas controlled it and sent it over to Barreiro, who tapped home the chance just 51 seconds into the stanza.

The lead ballooned to 3-0 with Thomas taking the role of goal scorer. Barreiro used a sweet touch to get it to Thomas, who beat the GK with a nice touch before nailing home the shot at 67:25.

Just six minutes later, the Orange and Blue was at it again. This time it was Contreras finding Blaettner, who looked like a veteran by rifling an upper 90’s shot to extend the lead to 4-0.

Play started to get a bit chippy, with NM State’s Devin Hart being sent off with the program’s first red card in its history. UTEP capitalized with the one-player advantage by pressuring even more.

There was a hand ball in the box against the Aggies in the 81st minute, and Enokson was tabbed to take the penalty kick. Showing no signs of jitters, she placed the ball perfectly into the upper right corner of the net to cap the scoring for the night.

UTEP will continue its season-opening weekend while also kicking off a stretch with three straight road games by playing at Abilene Christian at 12 p.m. MT Sunday.