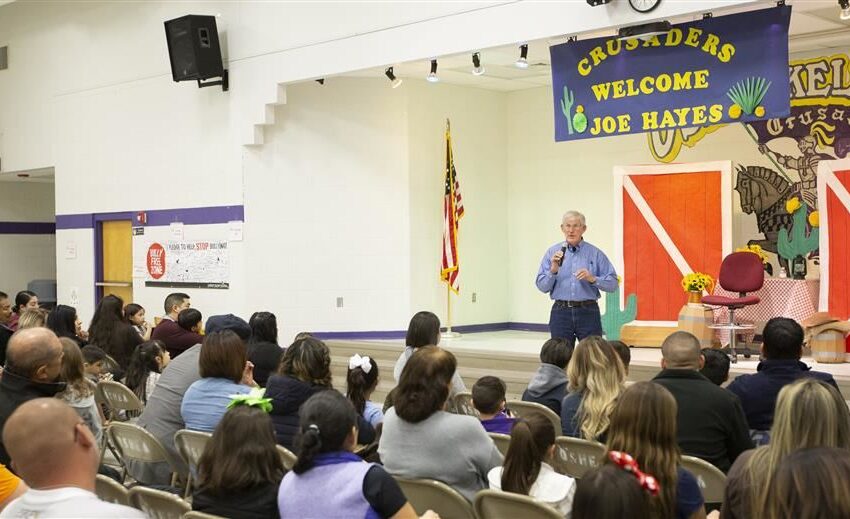 O’Shea Keleher Elementary invited one of the Southwest’s premier storytellers, Joe Hayes, to share with parents the importance of reading and storytelling.

Hayes, also a children’s author and a Texas Bluebonnet award nominee, spoke to a nearly-full cafeteria about literacy using his own personal stories, humor and numerous character voices. He told parents that telling their children stories or reading to them would not only help them academically, but it would strengthen their bond.

“When an adult, say a parent, tells stories to children, that makes a connection,” Hayes said. “You develop a better relationship and rapport with children when you tell them a story. We learn from the stories people tell us.”

Hayes relayed that he always told stories to his children and their school friends. It went so well, it grew into a career and extended into writing children’s books, such as “Grandpa’s Hal-La-Loo-Ya Hambone,” which was nominated for a Texas Bluebonnet Award.

“He is an amazing storyteller and a lot of his stories are from the Southwest,” said Nancy Jimenez, O’Shea Keleher librarian. “We knew he would help parents understand the importance of storytelling and dialoguing with children and how it plays a really important part of the education process.”

Jimenez said when the school educates parents on the academic development of children it helps to enhance students’ literacy and social skills.

Parent Anthony Schmidt and his son, Caden, a Pre-K student at O’Shea, usually leaves the reading and storytelling to his wife, who is bilingual. But now he plans to make an effort to read more to his son.

“I hope to become a better storyteller,” he said. “My wife is the one who told me about Joe Hayes. This has been a great experience. We got to meet him and listen to him.”