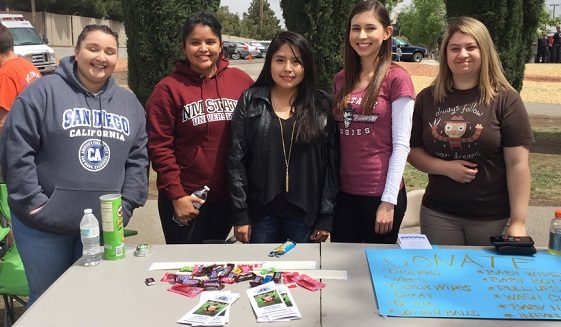 When Shylo Carrera-Little decided to major in nursing at New Mexico State University, she was initially hesitant to pursue any specialties that could lead to treating child abuse victims, fearing child abuse cases would be too emotionally taxing to handle.

But after taking a course in Child Advocacy Studies, or CAST, Carrera-Little is now pursing CAST as one of two minors, hoping to one day help and stand up for children who are neglected and abused. The CAST program is offered by the Department of Family and Consumer Sciences in the College of Agricultural, Consumer and Environmental Sciences to students majoring in varying disciplines across campus, including criminal justice, public health and social work.

“I think there are a lot of people who forget about these kids and what they need,” Carrera-Little said.

Carrera-Little and other CAST students want to make a positive impact in these children’s lives by organizing several events, including the collection of much-needed toiletries and other items, during Child Abuse Awareness Month in April. Carrera-Little and others in her group will be collecting toiletries, toys, books and clothing for the New Mexico Children, Youth and Families Department from 9 a.m. to 3 p.m. April 18 at the International Mall on campus. The group will also inform students and staff about CYFD services. Collected items will be given to children who are in or going into foster care, or who are removed from their homes.

The CAST minor was first offered last year and also offers professional training. Students taking the course learn about what it means to advocate for children, especially children who have been abused. Students also learn about how child advocacy applies to their majors and prepares them for any situation they may encounter regarding child abuse or neglect issues.

“The more people who know about this, the more intervention we can do,” said CAST instructor Connie Campos.

CAST students learn how to identify signs of child abuse and neglect, and are required to read “A Child Called ‘It’,” Dave Pelzer’s autobiography about the severe physical abuse he suffered as a child at the hands of his mother. Campos said while some students have difficulties reading the book’s graphic descriptions of child abuse, it leads to frank discussions about child abuse and neglect, especially by students who were victims themselves. According to the National Children’s Alliance, nearly 700,000 children in the U.S. are abused annually.

Larissa Barraza, a family and child science major, said although she was never abused as a child, reading “A Child Called ‘It’” struck a strong emotional chord.

“It was an eye-opener, but after reading the book it showed me that this is what I want to do,” Barraza said. “I didn’t realize how much a book could provoke my emotions, but I feel that nobody realizes how much child abuse is affecting future generations.”

Among the activities CAST students are hosting are:

– 10 a.m. to 2 p.m. today: Students will be at Corbett Center Student Union raising awareness about child advocacy issues by using the “Aggies Go Blue” slogan and the hashtags #aggiesgoblue and #preventingchildabuse on social media. They will also ask NMSU students and staff to decorate a baby T-shirt with a message.

– 9 a.m. to 5 p.m. Friday: A group will be at Mesilla Valley Mall raising awareness about child abuse by handing out printed information and asking people to sign the pledge, “If I see it, I will report it.”

– 9 a.m. to 3 p.m. April 18: Students will set up a table on the International Mall on campus to inform other students, faculty and staff about services offered by the New Mexico Children, Youth and Families Department. Students will also collect items for children going into foster care or who have been removed from their homes.

– 10 a.m. April 21: Students who have collected books, clothing and other items will be donating them to Jardin de los Niños.

– 4:30 p.m. April 25: Students who have collected personal hygiene items for children will be donating them to La Casa Children’s Program.

For more information on how to donate, please contact Campos at conniem@nmsu.edu.