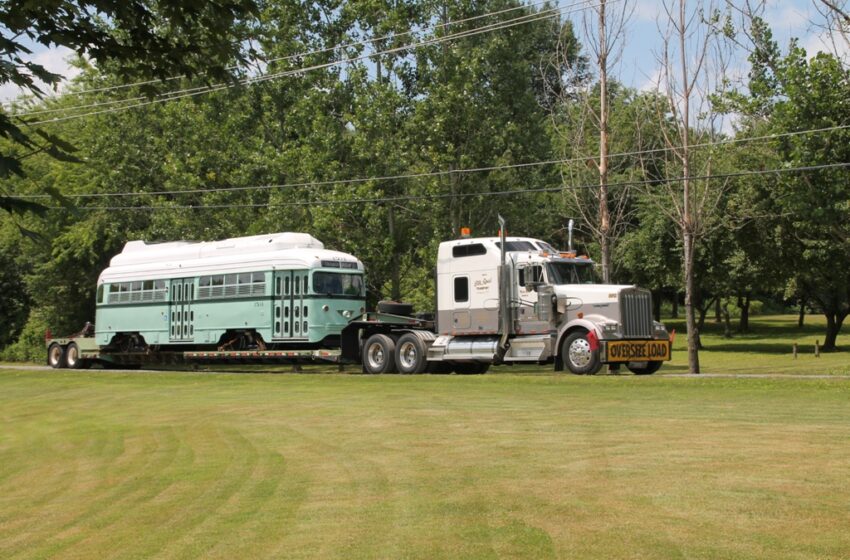 The third of El Paso’s newly-renovated streetcars is set to return home to the Sun City this weekend, replete in a very vintage color combination.

Car No. 1504 will arrive at approximately 10am on Sunday, July 15, 2018, according to the Camino Real Regional Mobility Authority.  The exact arrival time is subject to change without notice due to weather, traffic and/or other conditions beyond the CRRMA’s control.

1504 is part of the fleet of streetcars which ran in El Paso until 1974, and is the third of six vintage Presidents Conference Committee (PCC) streetcars to be refurbished and modernized as part of the $97 million El Paso Streetcar Project.

Each of the six streetcars will be painted in one of three vintage color schemes from the 1950s, 1960s and 1970s. Car No. 1504 is the first to debut the green-on-green color scheme which was originally used on the El Paso streetcars during the 1960s.

The two streetcars that previously made their way back to El Paso featured a red-on-green color scheme.

The truck that is carrying Car No. 1504 will enter Downtown El Paso accompanied by an escort and travel to Father Rahm Avenue where it will be unloaded. To accommodate that operation, Father Rahm Avenue will be closed between El Paso Street and Santa Fe Street beginning Saturday, July 14, 2018, the night prior to its arrival. It will re-open as soon as the unloading operation is complete.

Once the streetcar has been unloaded, it will be transported into the Maintenance and Storage Facility (MSF) at 601 South Santa Fe Street to be inspected by the CRRMA and Sun Metro.

Members of the public will not be able to access the streetcar at this time.

Motorists, pedestrian and cyclists are encouraged to avoid the area if possible. Use extreme caution and expect delays if travel in the area cannot be avoided.

The CRRMA will continue testing of the streetcars and the streetcar rail and electrical system to ensure the system is safe before Sun Metro begins operating the service for the public. In the coming weeks, residents will continue to see streetcars running along the 4.8 mile route but  won’t be able to board. Exact dates of testing are not available.

Below are some important tips to remember as we welcome the third streetcar back to El Paso: