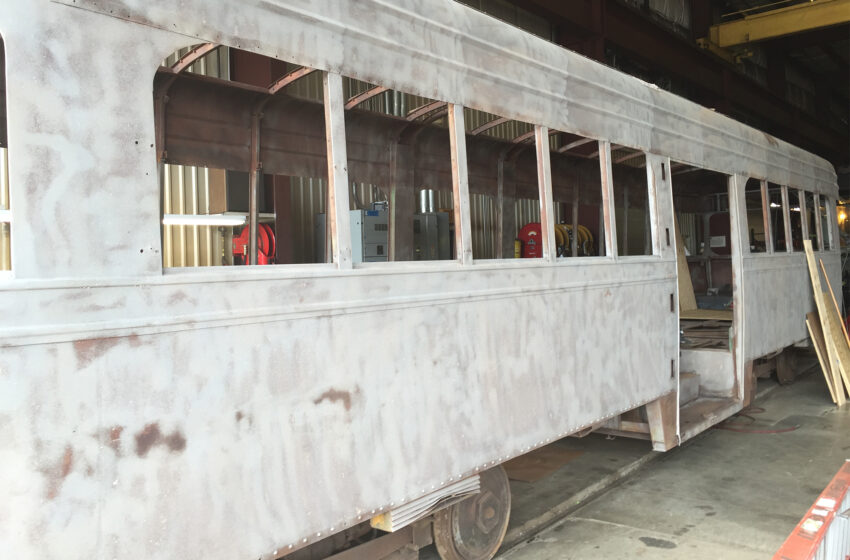 More than 1,900 miles from the street reconstruction, utility relocation, and rail welding of the El Paso Streetcar Project, the vintage vehicles which will roll again through Sun City streets are undergoing a transformation of their own.

The Camino Real Regional Mobility Authority (CRRMA) has released new photos of one of the historic streetcars which is being restored for the rigors of daily service by experts at Brookville Equipment Corporation in Brookville, Penn.

“We’ve been watching as this project becomes a reality in terms of the concrete and steel which we can see along the route, but it’s also exciting to see progress on the cars which are a signature component of this project,” said Raymond Telles, Executive Director of the CRRMA. “These photos also remind us of the multi-faceted nature of this project which includes restoration of the vintgage cars, extensive work along 4.8 mile route, construction of a maintenance storage facility downtown, and placement of the overhead contact system which will power the streetcars.”

The newly released photos show car number 1506 stripped down to its bare metal frame and sandblasted. All six of the historic Presidential Conference Committee (PCC) streetcars being restored by Brookville, will be upgraded with modern amenities including Wi-Fi and air conditioning while retaining the historic look and feel of the original streetcar line.

Each of the cars will be painted in one of three color schemes reflecting those used on El Paso’s streetcars before service was discontinued in 1974.

But before the streetcars can return to service in late 2018, much work remains for the crews of Paso del Norte Trackworks who are readying the route. Motorists should be aware of the following changes in traffic patterns in the coming days.

Overnight closures of Santa Fe Street will resume on Monday, August 29, 2016. Santa Fe will be closed to north-south traffic between Third Avenue and Father Rahm Avenue from 6pm to 4am Mondays thru Fridays. These closures will last for approximately three weeks. During the day and on weekends, current lane restrictions will remain in place on Santa Fe between Paisano Drive and Montestruc Court.

As work continues at other locations along the 4.8 mile route, the following street closures and lane restrictions will remain in place during the week of August 29, 2016:

Much of the work associated with the El Paso Streetcar Project cannot be completed during or immediately following heavy rain. As monsoon rains continues across the Desert Southwest, occasional unanticipated changes in scheduled construction activities may be required.