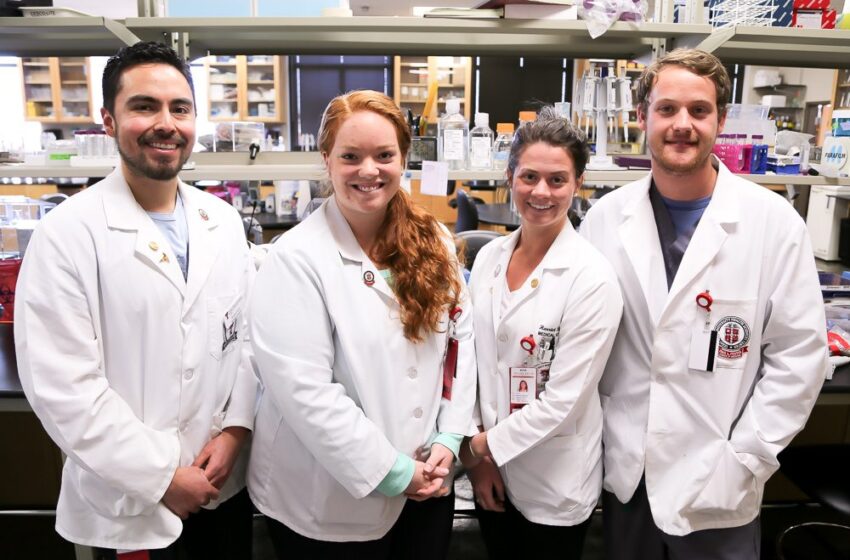 This past summer, a group of students in the Paul L. Foster School of Medicine conducted a study to better understand treatment options for diseases like multiple sclerosis. The fledgling physicians — only first-year medical students — had little to no research experience, but their results were surprisingly significant.

“We’re really excited about this,” says Assistant Professor Cynthia Perry, Ph.D., who participated in the initial stages of the study. “Typically, it takes graduate students and postdocs a year or two to put out a publication, but our students, who didn’t come in with a lot of training, were incredibly productive.”

The team members, who published their work this past January in the journal Neuroscience, included medical students Harriet Barratt, Hailey Budnick and Ricardo Parra, as well as research assistant Russell Lolley who was recently accepted to the Paul L. Foster School of Medicine. Olivera Nesic-Taylor, Ph.D., a former associate professor at Texas Tech University Health Sciences Center El Paso (TTUHSC El Paso), served as the principal investigator and mentored the students until she left in January 2016.

The students specifically studied demyelination, a condition in which the myelin sheath that covers neurons is damaged, disrupting the electrical impulses that are sent from the brain to the rest of the body. Multiple sclerosis is one example of a demyelinating disease; in worst-case scenarios, patients lose their vision or even the ability to control their legs and walk.

The students’ role was to test the idea. Between November 2014 and August 2015, they ran a series of experiments in TTUHSC El Paso’s Laboratory for Education in Molecular Medicine (LEMM).

Under Nesic-Taylor’s guidance, they examined whether tamoxifen, a drug used to treat breast cancer, can activate progenitor cells into oligodendrocytes.

“We were interested in tamoxifen because it’s already approved by the Federal Drug Administration,” Perry says. “The drug has passed all the safety trials, so it’s a lot more appealing if we could find a way to repurpose it [for another disease].”

The drug worked. When the students added tamoxifen to progenitor cells in petri dishes, the cells transformed into oligodendrocytes. Their work suggests that tamoxifen — a clinically safe drug — could be used to treat demyelinating diseases by hyper-activating the body’s repair system. This novel idea has high clinical relevancy.

“Our findings were hard earned,” says Harriet Barratt, now a second-year medical student. “The life of a med student sometimes can limit the amount of time put in [to research]; hard work and precision were key. We worked hard to make the experiments flow smoothly, and we were relieved to determine that we had significant results.”

Students in the PLFSOM are required to take part in the Scholarly Activity Research Program (SARP), which emphasizes that medical students receive basic, clinical and transitional research experience. As part of the program, students must conduct a faculty-mentored research project prior to graduation.

“It’s imperative that medical students conduct research, not just for the depth of academic knowledge it can give you on your particular subject, but also because it’s a great way to learn patience with obtaining results,” Barratt says. “It’s also important to understand the work that goes into the basic science behind the scientific principles of medicine.”

Perry says the study proves that SARP is an effective research program for students. Even without major research funding, the team garnered impressive results. The work was supported by a seed grant from TTUHSC El Paso’s Office of the Assistant Vice President for Research.