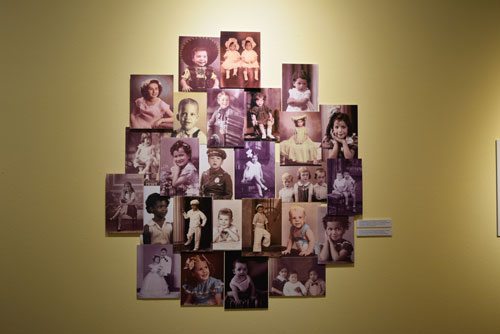 An exhibit at the El Paso Museum of History, created by University of Texas at El Paso students, aims to inform attendees and bridge the generational gap.

“Through a Child’s Eyes: Growing Up in El Paso 1880-1950” tells the story of El Paso’s children during a time when the city’s demographics changed to an increasingly youthful population. The exhibit is open through July 10.

Students in the museum studies class provided curatorial work under the direction of Daniel Carey-Whalen, coordinator of museum studies and public culture.

“It gave them a very hands-on experience that will help them in their future jobs as historians,” Leyva said. “They gained an understanding of how you can make your own historical research relevant in your own community.”

The collection includes artifacts and images from UTEP’s Casasola Studio Photo Database, the Downtown public library, The University of Texas at Austin, and Leyva.

“A lot of (the exhibit) is just a day in the life of a kid,” Carey-Whalen said. “The way the students set up the exhibit is as a series of vignettes.”

One vignette shows a street with a hopscotch game drawn on the ground, the type of scene in which kids in the 1950s would have played. A grandparent and grandchild walking through this part of the exhibit could then compare that childhood scene to how children play today.

Lucero A. Duran, who graduated with a political science degree in May 2016, did research about early schools in El Paso for the exhibit.

“I think one of the things that I really learned in this exhibit was teamwork, not only with other students but with several organizations working together,” Duran said. “This exhibit had so many layers and so many people bringing their special sparkle to it, and it was amazing getting to bring everyone’s ideas together and making it work.”

Amy Briones, a senior majoring in graphic design, was instrumental in the exhibit because she selected the color scheme, weighed in heavily on the design and layout of the exhibition and created the logo. Briones said she hopes exhibit attendees will learn something about childhood in El Paso when they visit.

“Perhaps children could learn how different yet the same childhood was back then,” Briones said. “The point of the exhibit is to teach but also have it be an experience. The layout is mostly linear and separated into ‘spaces’ (home, school, street, etc.) This is so people could understand the limited choices and simplicity children had. They go to school, sometimes work, maybe stop by a candy store, and then go home. We hope the exhibit reflects that.”

Leyva also wants attendees to begin a dialogue with each other.

“We want there to be inter-generational conversations between grandparents and grandkids when they see the exhibit and get kids to look at things now compared to things back then,” Leyva said.

For Hector Enriquez, who visited the exhibit, it brought back memories.

“My great grandmother lived in a tenement in South El Paso, so it is easy to relate to the scene in the exhibition,” Enriquez said. “A lot of what was there was familiar to me. It brought back memories of going to get a snowcone from the ice cream truck.”

Enriquez added that the exhibit succeeds in showing the world through a child’s eyes.

“You see the joy of children in the exhibit,” Enriquez said.

Free. However, special exhibits are subject to entry fees.