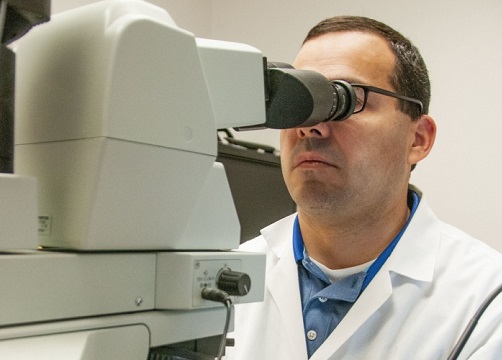 The study showed that WBAMC is compliant with national evidence-based guidelines.

The study looked at dozens of cases involving NSCLC which required biomarker testing from 2015 to 2018.

“At one of our quarterly Commission on Cancer meetings, it was suggested to perform a study to monitor WBAMC compliance rate of biomarker testing for Non-Small Cell lung cancers. This is one of the Commission on Cancer Standards. With this study, not only we can evaluate our compliance rate of biomarker testing for NSCLC, but also we can investigate the turnaround times (TAT) of these tests that are sent to Reference Laboratories. The turnaround time measures how fast we can get those test results back to the physician who ordered the biomarker tests once we send them,” said Dr. Domingo Rosario, pathologist, Department of Pathology, WBAMC. “Ideally it would be two weeks or less, the study was to evaluate if that is possible or not.”

According to research published by the U.S. Department of Health and Human Services, lung cancer is the leading cause of cancer-related mortality worldwide, with 84 percent of those composed of NSCLC cases. Timely and accurate diagnosis as well as prompt biomarker testing are important factors that will help the medical team decide the best treatment approach for the patient. These samples would theoretically lead to a quicker response to potentially life-threatening cancers.

“What we noticed is that two weeks or less is not realistic TAT, because the sample is tested at different sections of the reference lab, and the average TAT was 24 days,” said Rosario, who authored the study.

While no guidelines exist for turnaround times of biomarker testing for NSCLC, the study does assist pathologists and clinicians provide realistic expectations for test results, in addition to improving communications with patients regarding diagnosis timeframes.

“Once we get (test results), we will communicate those results immediately to the clinician via emails and through addendums,” said Rosario, a native of Jayuya, Puerto Rico. “Different samples require different molecular tests, we do what the clinician asks for once the cases are discussed at tumor boards.”

By keeping communication open with clinicians, the results of biomarker tests are relayed one by one, as they are received, until the complete and final reference lab report is received by the WBAMC Anatomic Pathology Section. “For example PD-L1 immunohistochemical stain results may be available before EGFR and ALK testing, so we will communicate that PD-L1 result first, so there is not a delay in patient management” said Rosario. This allows immediate options for treatment to be discussed with patients, consequently increasing survival possibility.

“We are doing really well in the hospital even with minimally-invasive procedures”. “The study showed that biopsy samples from Interventional Radiology and surgery, and even cytology specimens (by Pulmonology team) are yielding really good material for these tests,” said Rosario. “The trend in patient management is to have a tissue biopsy via minimally-invasive procedures. Based on our study, even tiny biopsies that we got were adequate for testing.”

According to Rosario, because samples from minimally-invasive procedures have proved effective, it may eliminate the need for larger resections to procure samples for biomarkers testing for NSCLC and other diseases. Rosario adds the effectiveness of such testing is a testament to the high-quality patient care clinicians provide in getting a tissue sample.

“Sometimes the patient may not even undergo the resection and they can start treatment based off the tiny sample that we get,” said Rosario. “It’s really good for (patients and clinicians) because if (results show) a positive lymph node which indicates metastatic adenocarcinoma and clinicians know the patient won’t need a resection then they can start treating with chemotherapy based on biomarkers results, just with a few cells.”

More importantly, the study reveals 100 percent compliance, over the past four years, for testing of all NSCLC which require biomarker testing, meaning all samples were adequately tested.

“With this study it shows that no patients slipped through the cracks,” said Rosario. “That’s something really positive for the hospital.”