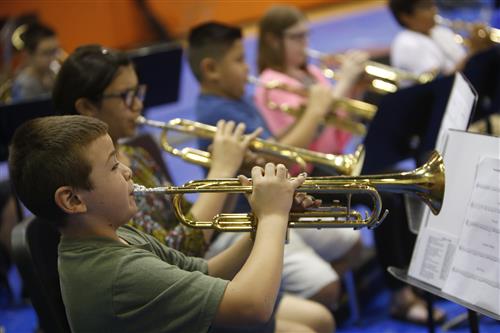 For students Ross and Wiggs middle schools, the summer break meant much more than long naps and time in front of the television. For these students, most of whom are new to band, the first part of the long break was spent jamming on percussion, woodwind and brass instruments.

“The summer band camp helps students stay in shape over the summer. Our main goal is to keep them playing,” Wiggs band director Jaime Orpinel said. “We want them to keep those skills up and start the year strong.”

Although the final concert has a patriotic focus, students are allowed to cut loose and play music outside of their usual repertoire.

“We like to do pop selections that are fun for the kids to play,” Orpinel said. “These songs have little thing they aren’t even aware they are doing, such as chromatic scales. The camp also gives students an opportunity to expand on their playing and even learn different instruments.”

The camp is divided into beginning and advanced classes. New students can get a jump on playing their instruments before the start of the semester and returning band students can work on techniques they have learned throughout the previous school year.

Ross eighth-grader Michael Genera loves practicing his skills on the tuba. This is the second year he participates in summer band camp.

“I have been playing for two years, and it’s awesome because music really expands your mind,” he said. “This is a great program to get you

out of the house and instead do something. I get to hang out with my band mates and play with students from other schools.”

“I already feel like I am part of the band. The band family has already said, ‘hey come play with us,’” Carrillo said. “Summer band shows your commitment to the band program and that you really want to do it.”

The three-week summer band camp ended with a combined concert, featuring music from the Beatles and the Marches of the Armed Forces.