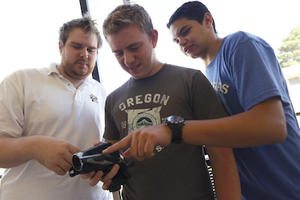 Blockbusters will not be the only ones on the big screen this summer as EPISD students get ready to premiere their films at El Paso High School this week.

The films were created during the Digital Film Academy, an EPISD Summer Enrichment Program that teaches high-school students the fundamentals of movie making.

“This program really teaches them from idea, to script, to production and to editing,” Coronado teacher Alex Seufert said. “They go through every step in the process you would have on a major film. They are making a movie by themselves.”

Students can work in teams or individually, and must meet certain criteria such as character and plot development when creating their short films.

The program is available to all EPISD high school students, incoming freshmen and even recently graduated seniors. Students can go to the Coronado High or Andress High campuses to participate.

Incoming freshman Brevin Samargia was really pumped to participate in the program since he has always wanted to make his own short films.

“I really wanted to be part of the film academy because I really enjoy filmmaking,” Samargia said. “With this camp I have the opportunity to be able to do that in a professional manner.”

Students have just three weeks to write, film and edit their scripts, but their enthusiasm for film has showed they were more than ready for the task at hand.

“This year’s group has really well written scripts,” Seufert said. “They are very prepared. I asked them to have their scripts ready by the end of the first week, and they all had them done.”

Senior Rachel Kallman, who has participated in the program for two years, wrote her script last fall, recruiting family members during Thanksgiving break to act in her film.

“I feel like this program really prepares you if you are going into filmmaking,” Kallman said. “You really learn to work with time constraints. You have to stick to your deadline, make a plan and keep to your schedule.”

Time management definitely plays a big role when students start the editing process since it is the most time consuming.

“One of the biggest accomplishments for these students is learning to edit their films,” Andress teacher Ismael Barraza said.

The students use professional editing software Adobe Premiere Pro to edit their films and make them come to life.

“They learn what the program has to offer as far as editing. These kids are using tools like warp stabilizers and different slow-motion effects,” Barraza said. “It’s really cool the kinds of things they are doing.”

Students will present their films at El Paso High Friday starting at 6 p.m.