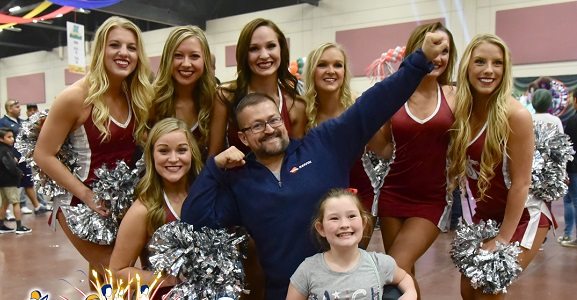 With a new sponsor and an great marquee match up between Stanford and the University of North Carolina, the annual Fan Fiesta returns to Downtown El Paso next week.

The 2016 Fan Fiesta -Presented by El Paso Live, is set for Thursday, December 29 at the Judson F. Williams Convention Center from 4-8 p.m. (MT), with a fireworks show immediately following.

An El Paso holiday staple since 1998, the Fan Fiesta has gained a new sponsor in El Paso Live.

Admission to the event is free with a wide variety of entertainment planned for the party, including local afro-toting disco legends, Fungi Mungle, matachines dancers, mariachis, ballet folklorico and performances by the University of North Carolina and Stanford’s Stand-in Band Horizon High.

Restaurants including Forti’s Mexican Elder, Carnitas Queretaro and Delicious Burrito will be serving up signature dishes. Academy Sports’ interactive tent, along with Sports World and Hyundai Sun Bowl Apparel, are providing team gear to Stanford and North Carolina, along with El Paso-themed items.

A kids’ area will also be set up with 18 interactive and inflatable activities. A $5 wristband is required. Military guests with a valid ID can enjoy the interactive attractions for free.

The Fan Fiesta is a way to showcase the spirit, flavor and hospitality of El Paso. Along with the various performing groups representing different artistic styles, multiple food and merchandise vendors will be on hand.

*FREE – Face painting for the kids and adults

The Sun Bowl Fan Fiesta will COMP all military children under 12 a $5 wristband. This will allow unlimited entries to the 18 inflatable/interactive games.

You must present your Military ID at the inflatable games ticket tent to receive the wristband.

Story in Many Pics: Tony The Tiger...