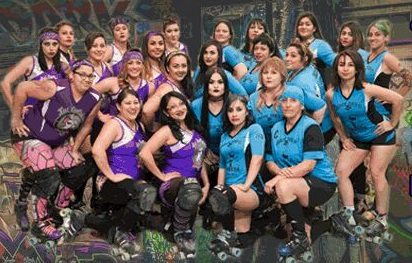 They’re back on track!  The fierce, competitive women of the banked track roller derby are ready to take on a new season, starting Sunday, February 19, at their exclusive home at the El Paso County Coliseum Judging Arena at 4100 E. Paisano.

The ninth season opener for the popular Sun City Roller Girls will feature an exciting bout between Las Catrinas and the Chuco Town Chulas at 6 p.m. The women are also playing to benefit the From the Heart Rescue charity organization. Doors open at 5 p.m.

Sun City Roller Girls was founded in June 2008 and is a women-owned and -operated roller derby league in El Paso. The league is one of only 23 leagues nationwide who play on a banked track, affectionately known in El Paso as “La Llorona.”

Throughout the years, Sun City Roller Girls has grown in numbers and popularity and remains the only roller derby in El Paso.