People have to go through temperature checks before entering Speaking Rock Entertainment Center during the pandemic. (Photo courtesy of Borderzine.com

The Supreme Court on Monday gave El Paso’s Tigua Indians at least a small victory in their long-running gambling fight with the state of Texas, asking the Justice Department for the first time to weigh in on the decades-old dispute.

“The Acting Solicitor General is invited to file a brief in this case expressing the views of the United States,” the high court said in a brief order Monday. The solicitor general works for the Justice Department and represents the federal government before the high court.

The order has one immediate practical effect for the Tiguas: keeping its casino operating. The ruling prolongs the tribe’s appeal of lower court rulings that it was illegally offering gambling at Speaking Rock Entertainment Center. A District Court stay allows the games to continue while the case is appealed. Monday’s order doesn’t give the Justice Department a deadline for filing a brief, but it’s likely the appeal will now be extended by several months.

Monday’s order may be the latest example of Justice Neil Gorsuch’s growing influence on cases involving tribal rights, said Todd Curry, a political science professor at the University of Texas at El Paso who has done extensive research in indigenous law.

“It’s really a new ball game with Gorsuch on the court. He is an advocate for tribes in the U.S., and really is changing the landscape for how these cases play out,” Curry said. Tribal gambling “is an area where Texas really is different, and I think the justices are looking for an independent opinion.”

He said by calling for the view of the solicitor general, “the court is signaling they need an expert to weigh in who isn’t party to the case.”

The court is asking the solicitor general to offer an opinion on whether it should hear the Tigua appeal by granting a “writ of certiorari,” often called cert for short. “Whatever side the solicitor general comes down on (cert or not cert), the justices will almost always follow,” Curry said in an email.

El Paso Matters has reached out the Texas attorney general and Tigua representatives for comment on Monday’s order.

The Supreme Court has refused to take up the issue of gambling by the Tiguas (formally known as the Ysleta del Sur Pueblo) and Alabama-Coushatta tribe of East Texas in five separate appeals dating back to 2001. In each case — most recently in 2019 — the court declined to hear the appeals and left in place rulings by the 5th Circuit Court of Appeals that the tribal gaming violated state law.

Monday marked the first time that the Supreme Court asked the solicitor general to take a stand in the dispute between the tribes and the state.

The tribes and state have been locked in a dispute over gambling for almost 30 years. The most recent case involves a 2019 ruling by U.S. District Judge Philip Martinez that the Tiguas were violating state gambling laws at Speaking Rock Entertainment Center in the Lower Valley. The 5th Circuit Court of Appeals upheld Martinez’s ruling last year, and the tribe appealed to the Supreme Court.

Both tribes offer bingo and hundreds of slot-machine style games that rely on previous bingo games to determine winners and losers.

The Alabama-Coushatta tribe in Livingston, Texas, has faced a similar gambling battle with the state. A federal judge in 2018 ruled that the tribe’s Naskila Casino violated state law, and the 5th Circuit upheld that ruling in 2019. The Supreme Court declined to hear the Alabama-Coushatta appeal in January 2020.

The case then returned to the original East Texas trial court in March 2020 for determinations on the state’s request for a contempt of court citation and an injunction ending much of the Alabama-Coushatta gambling operations.

Action on the Alabama-Coushatta case has been repeatedly postponed by the COVID-19 pandemic. A trial is currently set for May 17, though Monday’s Supreme Court order likely will delay the trial further.

The Tigua and Alabama-Coushatta regained federal recognition as tribes through a 1987 law called the Restoration Act. The act says: “All gaming activities which are prohibited by the laws of the State of Texas are hereby prohibited on the reservation and on lands of the tribe.”

In 1988, Congress passed a law called the Indian Gaming Regulatory Act to “provide a statutory basis for the operation of gaming by Indian tribes as a means of promoting tribal economic development, self-sufficiency, and strong tribal governments.”

Through repeated court fights dating to the early 1990s, federal judges have almost always sided with the state’s interpretation and the 5th Circuit Court of Appeals has repeatedly upheld those rulings.

A third Indian tribe in Texas, the Kickapoo in Eagle Pass, operates the Lucky Eagle Casino. The state has allowed the tribe to conduct bingo-style gaming, but has refused to negotiate a compact that would allow it to offer other forms of gambling.

One other route for the tribes is a change in state or federal law to provide gambling on their land. Such a bill passed the U.S. House of Representatives in 2019 but was never taken up by the Senate. The Texas Legislature may consider legislation to legalize some casino gambling this year, but prospects are uncertain.

Moore is the founder and CEO of El Paso Matters. He has been a journalist in the Texas Borderlands since 1986. His work has received a number of top journalism honors including the Robert F. Kennedy Journalism Award, Pulitzer Prize finalist and the Benjamin C. Bradlee Editor of the Year Award. Moore’s work has appeared in the Washington Post, Texas Monthly, ProPublica, National Public Radio, The Guardian and other publications. He has been featured as an expert on border issues by CNN, MSNBC, BBC, CBC and PBS. 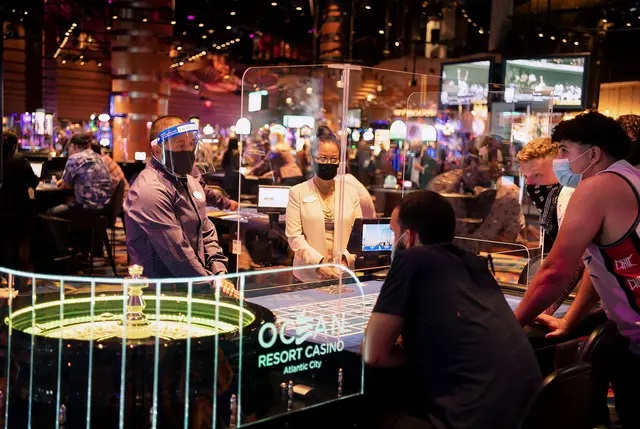 Analysis: The odds for legal pot and...