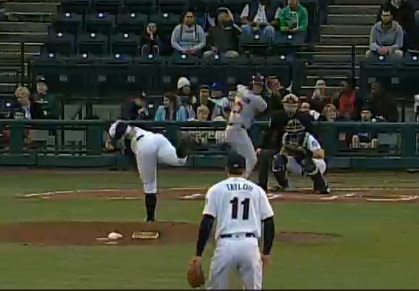 The Tacoma Rainiers beat the El Paso Chihuahuas 4-1 Thursday on a rainy night at Cheney Stadium. Neither team had a run or a hit through the first five innings as starters Jeremy Guthrie and Cody Martin were putting down hitters early.

The Chihuahuas broke the scoreless and hitless tie when Jason Hagerty struck a solo home run to begin the top of the sixth, his first longball of the season. Tacoma countered with four runs on six hits, including four for extra bases, in the bottom of the sixth against Guthrie and reliever Frank Garces.

El Paso had two hits to begin the top of the eighth but did not score. Chihuahuas’ reliever Derek Eitel pitched a scoreless inning and hasn’t allowed any runs in his first three outings of the season. Hagerty went 2-for-3 in the loss for the Chihuahuas.