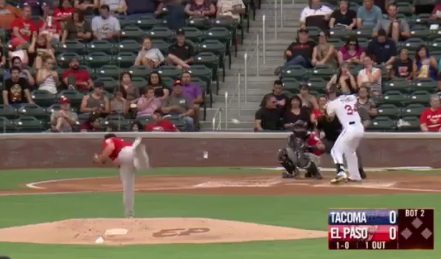 Sam Gaviglio shut down the El Paso Chihuahuas’ offense Wednesday for the second time in six days, as the Tacoma Rainiers won at Southwest University Park 9-2.

Gaviglio allowed one run in six innings, after pitching 7.2 scoreless innings against the Chihuahuas on July 29 at Cheney Stadium.

Rainiers’ first baseman D.J. Peterson went 5-for-5 with an inside-the-park home run to lead off the seventh inning. El Paso center fielder Auston Bousfield nearly made a leaping catch on the play, but the ball bounced sharply to the right field corner and Peterson rounded the bases without a play at the plate.

It was the second inside-the-park home run in Southwest University Park history, with the first coming on April 29, 2014 off the bat of Fresno’s Gary Brown.

Nick Torres went 2-for-4 with a solo home run in the second inning on his first at bat in El Paso. Carlos Asuaje and Nick Noonan also collected two hits in the loss. Infielder Taylor Lindsey came in to pitch and threw knuckleballs in a perfect ninth inning, his third pitching appearance of the season.

Chihuahuas down Redbirds 6-1; ‘Dogs remain in...