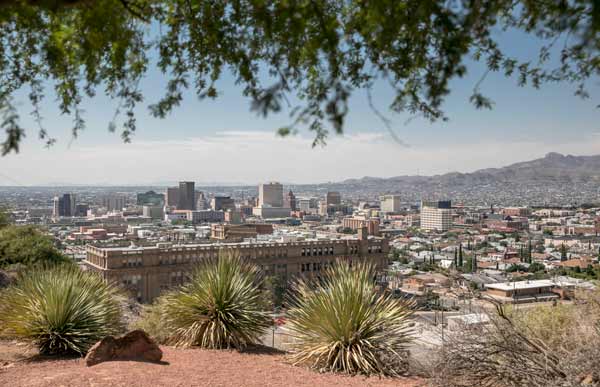 Driving past the mountain on Sun Bowl Drive to The University of Texas at El Paso, Stan Lau glanced at the dilapidated shanties lining the Anapra hillside, one of the poorest neighborhoods in Juárez.

This was Lau’s first look at the Mexican city located across the Rio Grande from UTEP. Before that morning, Lau had only read about Juárez in news accounts and in the novel “If I Die in Juárez,” which he read for a Mexican-American literature class he took in graduate school.

“You can see the (U.S.-Mexico) border right there,” Lau, an English teacher at San Francisco University High School, said. “It’s this prominent reminder of difference (between two countries), and yet I don’t know if there is really that much of a difference.”

Lau and 24 other middle and high school teachers from across the United States were at UTEP for a two-week summer institute in July titled, “Tales from the Chihuahuan Desert: Borderlands Narratives about Identity and Binationalism,” sponsored by the National Endowment for the Humanities (NEH).

“I think the important thing for me is to be in this space, to be fully present, and to see for myself,” Lau continued, “and to act as an ambassador for UTEP and share what I learned because I think this is a really special space.”

It also addressed stereotypes that have portrayed the U.S.-Mexico border region as dangerous, illegitimate, and as part of a distinct counter-culture.

“The teachers that have come to us are teaching in places like New York, Florida and Atlanta, and they have binational students,” said Martínez, an assistant professor of history. “This institute is about how we tell the stories of binational people and how those stories impact students across the country who are experiencing some of the same issues that people in the borderland experience in terms of nationality and identity.”

From July 16-30, 2017, teachers explored the land and the people of the Chihuahuan desert through history, literature, art, film, journalism, music and theater.

They created e-portfolios that included lesson plans to teach their students about the impact the border’s binational populations have had on the American experience, which some believe has been minimized in textbooks.

“We want teachers to know that they’re always learners like their students,” said Rodríguez, an assistant professor of English. “The narratives of biculturalism and of binationalism continue to change. We have many contributions of artists, historians, writers from this region, and that keeps changing the growing body of literature. We want to introduce them to those canonical voices of the past, but also the contemporary classics that are among us.”

They toured the El Paso Mission Trail, Old Mesilla and other historic and cultural sites, and also heard firsthand accounts about triumphs and challenges from people living in the borderland.

Talia Gonzalez, an eighth-grade Spanish teacher from New York, was inspired after she listened to Antonia Morales, a 40-year resident of the Duranguito neighborhood in Downtown El Paso, talk about her struggle with the city to keep her home from being demolished.

“We in particular strive to teach our kids to be activists, but she’s doing it at 89 years old by herself,” Gonzalez said. “(Morales) says she’s not educated and she doesn’t have the tools that we have, but she’s still doing it and that’s what we want our kids to learn.”

Gonzalez teaches a class on Latinos in the U.S. She covers topics on immigration, identity, civil rights and equal treatment. Her goal is to incorporate themes from the institute into her curriculum.

“I live in New York, so obviously far from the U.S.-Mexico border,” Gonzalez said. “When I talk to my students about immigration, it’s not really looking at the Southwest and the border. It’s a different experience. Some of my kids and their families have crossed the Southwestern border and I want to talk to them about that and incorporate their experiences. I want (my students) to understand what that’s like because it’s part of the American story and it needs to be told.”

The Summer Institute at UTEP is one of 70 NEH education summer programs taking place at schools, colleges and universities across the country on a variety of humanities topics. Stipends of up to $3,300 help cover expenses for these one- to four-week residential programs.

Richard Pettit, a program analyst for the NEH’s Division of Education Programs, said the NEH looks to fund projects that have solid humanities content. The NEH has previously funded programs that have focused on the U.S.-Mexico border, but Pettit noted that UTEP’s summer institute was unique.

“(Ignacio Martínez and Joseph Rodríguez) are really creative,” said Pettit, who was at the institute to conduct a site visit. “I think they’re doing a really wonderful job and you can see the teachers are enthusiastic.”

Pettit said a goal of these residential summer programs was for participants to learn from each other and form long-lasting relationships.

“What’s been really amazing about this institute is the fact that I get to meet teachers from all walks of life in different types of schools in one space in which we bring our own lenses to the conversation,” Lau said. He plans to apply his knowledge from the institute to create a course on “The Global Novel.” “That is really inspiring and enriching.”

More information on the Summer Institute is available here.